Thank-you to Amazon Customer for Review #7.

I had a question come in asking about the mast crop in my part of Michigan.

Some kinds of mast straddle the fence. Chestnuts are more like potatoes than most other kinds of nuts. Acorns from the white oak group are likely to sprout as soon as they hit the ground. On the other hand, some kinds of pears are as hard as rocks and are difficult for deer to gnaw on until a couple of freezes have softened them up.

Some species have a strong crop: Northern Red Oak and Bitternut Hickory.

Most others have partial crops at best.

We had two significant freeze events in the second week of May. Even the species that are not blooming are extending succulent growth that is vulnerable to freeze damage. The secondary buds that push are not always fruitful.

Like all things related to freeze damage, the degree of damage varies by site. Branches lower on the trees and partially sheltered by higher branches avoided the worst of the damage. A few trees on elevation and sloping ground did OK.

I suspect we have an exceptionally high squirrel population this year. While running I have seen where squirrels were cutting Box Elder seeds and Tulip Tree seeds out of trees already. I don't recall seeing that before. 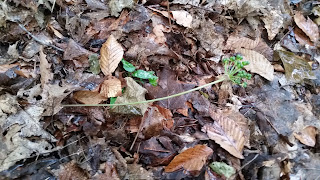 Ramps have an interesting life-cycle. Ramps are a perennial in the onion family.

They have bulbs. In the early spring before the trees leaf-out, they push large numbers of lush, tender, mildly onion-flavored greens. The greens die away after the tree canopies shade the ground. Then, in August, the seed stalk pushes. 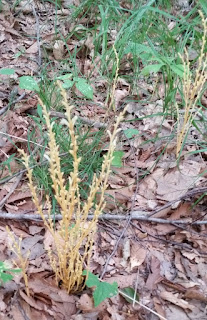 Not every plant has chlorophyll. These are called Beech Drops and yes, I found them in a stand of beech trees.

Beech trees are in decline in some areas and exploding in others. Both places consider it a problem.

Beech trees fill a niche similar to Sugar Maple. They are a climax forest species and the roots tend to be shallow. That makes them vulnerable to compaction due to animal hooves and, presumably, wheeled vehicles racing around in the woods.

The wood is not considered particularly valuable but that can change if supplies of other, higher value hardwoods cannot keep with demand.

I put an electric fence around my sweet corn this year. I didn't have much evidence of its effectiveness until I took it down.

We had zero losses in two weeks of picking corn while the fence was energized.

Four days after turning it off 90% of what we had not picked was hammered.

I think raccoons must be very sensitive to electricity. They tend to be grabbers and sniffers and their bare feet are good conductors to ground.

The fence was not very hot. I was driving a lot of perimeter fence and the fence had a lot of grass loading.

I guess it was hot enough.