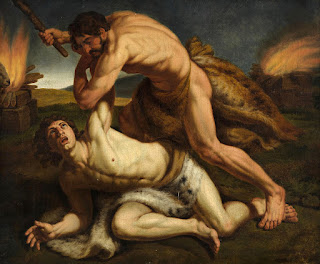 “Murder is a sin” my mother reminded me.

“To murder is to kill outside the law” I replied.

“How will you live with yourself if you have to kill somebody tonight?” mom asked.

I thought about that for a bit.

“Jesus was a carpenter. He used tools. Dad always said that we were God's arms and strong-backs and we are here to do his heavy lifting. I guess that makes us his tools.” I said.

“The end does not justify the means” Mom chided me.

“It does when God is directing the heavy lifting” I said back.

One of the memories I have of my Dad was getting "The Talk". He had a list of scripts that every one of us kids got. This time, "The Talk" was in the basement. He pulled a battered, short chisel out of his pocket and handed it to me. The chisel had obviously started out life much longer but over time and multiple sharpenings had been shortened until there was no useful life left in it. The striking end was mushroomed. The cutting edge was blunt and chipped.

Dad was a stoic and very big on duty. "There are a hundred work-horses for every show horse. There are a thousand working in darkness for every person who gets credit" he told me.

"Odds are you are going to be one of those people working in the dark, just like I am" he added. "People like me, tools like this chisel, we are the real heroes."

"How do you figure?" I asked. I knew he was trying to tell me something he thought was important.

"The guy who gets the credit? He gets paid with glory. The guys like me and you? We do it because it is the right thing to do, even when we get hammered just like this chisel" he said. "We gotta job to do. We do it."

Funny how the memory of holding that four-and-a-half inch long hunk of steel still sticks with me. I can still feel the weight and remembering marveling at the forces it had endured, forces that had peeled the striking end back like a banana. I remember that it was odd that the metal was neither warm nor cold. It was exactly the temperature of my hand.

“How will you know?” Mom asked.

“I might not...at least I might not until judgment day. ‘What does the Lord ask of thee but that you do justice and love goodness and walk humbly before your God’ “ I replied.

“I think I am ready for bed” she told me.

It takes a half hour to get her in bed. She asked for a pair of adult diapers “Just in case you are busy when I have to go”

I kissed her on her forehead.

I carried the rifle to the garage and found the stacks of five gallon buckets. I chose a dark one. Good old dad. He had a collection. I could have had any one of about eight different colors.

I carried it to my hide and did a little bit of last minute fiddling. That included scraping anything on the ground that would make noise when I moved my feet. I set my smartphone to buzz and turned the brightness down as far as it would go.

One advantage of wearing a mask is that it kept my face warm. I was wearing a dark blue bandana which dimmed my face.

I texted Marie: “I am sitting outside. Give me a bump if you hear anything I should know.”

I settled in for a long, cold sit.

Cold, but not boring. I got a bump every five minutes or so. My habit of falling asleep when not moving was legendary. I wasn’t getting hit with every detail but was given the highlights.

A portion of the mob left the grounds of the Hall-of-Justice. Another mob was assembling at a vacant lot closer to the target east of Mom's. Vehicles were dropping off “demonstrators” in a church parking lot near the south target. Some of those vehicles were big buses. Bit-by-bit it was coming together.

Most of the information was posted on social media. It was there for anybody who looked.

It was clear in my mind that this was not going to be a spontaneous attack. Demonstrators don’t "spontaneously" assemble in staging areas away from the demonstration. These are people who cannot be bothered to change the oil in their cars or mail in the tab for their license plates. Thinking ahead is not one of their skills.

Frankly, it was a bit of a relief. It sucked for Jamie and Vince but was good for Mom. The likelihood of rioters accidentally wandering into Mom’s neighborhood was about zero since the staging areas were on the far side of their likely targets.

Six skinny guys. Well, I think they are guys. Six guys strolling along, slowly through the freezing drizzle.

Dudes, Halloween was LAST month. What are you doing HERE?

They stopped in the middle of the intersection a scant fifty yards from my position.

There are a few things you need to know about Mom’s neighborhood before I continue.

If I had to walk away from a full stein of beer, you can suffer with me for an extra minute or two.

The street layout in Mom’s neighborhood is Byzantine. It is almost as if the planners had taken a big bowl of chicken entrails and dumped them on the floor, smeared them around with a shovel and then told the road builders "Build them like that”

Mom said it was intentional. The planners wanted to discourage workers at the local factory from racing their cars through the then-posh neighborhood so they made it impossible to travel through it in straight lines.

The inevitable result was that many of the intersections were not the typical four-way. There were a bunch of three-ways and several five-way intersections and even a six-way.

In fact, the men were camped out in the middle of one of the few five-ways that was nearby.

One man was fiddling with a tablet. The bluish glow lit up his face. I am sure it totally trashed his night-vision but his body language did not communicate any concern.

The other men were working radios. Every once in a while, they would say a few words to the man working the tablet and then hand him the radio. The boss would rasp out a few words and then hand the radio back, then return to his tablet.

They reminded me of a big breakdown in the factory. The big-boss “running the show” transmitting energy like a high voltage wire. Raging into the cell phone “I don’t CARE that the damned circuit-board is in Toledo. Put it in a cab or drive it up here yourself. We are losing Eighty-Fucking-Thousand-Dollars a minute when we aren’t running!!!”

Then it hit me. The intersection had elevation and clear lines of sight. It had multiple ways to egress. It was mid-way between the two riots. No wonder they were setting up a mobile command post right by Mom’s house.

I stood pat. I was a hunter, not a shooter. Yet.

Text from Marie: "The rioters were coming down Vinnie’s street. They are breaking windows and throwing Molotov Cocktails at the houses that had sported yard-signs supporting President Bowers’ party."

A couple minutes later: "According to Vince, the rioters were well supplied with munitions. Several are pushing baby carriages and jogging strollers loaded with 'stuff'. "

Vince kept his yard sterile. He would probably be OK.

McCorkle lived just up the street from him.

McCorkle was a crusty old bastard. Drove a beer truck most of his life. Always flew an American flag. Never voted, though. Said they were all evil bastards. Never had any yard signs. You couldn't have PAID him to put one up.