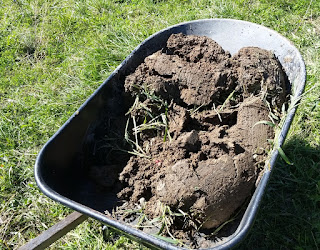 Like virtually every house ever built, we have issues with soil next to the foundation subsiding and water running back toward the house. Infiltrating, it then leaks into the basement.

One side of our house has gables and the valleys both feed into a 16' run of eves trough. 800 square feet of roof dumping into 16' of eve trough, especially when it gets some trash on the screens, does not make for a happy day.

Mrs ERJ suggested that we do something about it before the snow flies.

One wheelbarrow load of dirt is about enough to raise 2' of foundation/ground interface. I really don't want to have to do this again in another ten or fifteen years.

The dirt is coming from our all-purpose burn-pit/shooting-range/cow-pond. The easiest dirt to dig is from the bottom of the pit. It is as heavy as the wages of sin but rich in clay. Each shovelful is carried by hand and dumped into the wheelbarrow. Then the wheelbarrow is pushed uphill to the house.