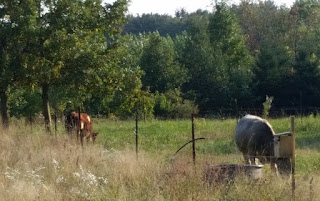 The Captain (RIP) had been using a Shorthorn bull the last seven years or so.

He had a Hereford lined up as his replacement when he slipped his mortal coil.

His brood-cows were a mix of Angus crosses and Shorthorn crosses and even some Charolais (which occasionally threw monsterously large calves).

Sprite is getting out of the cattle business and sent both bulls and the brood cows down the road.

These are the last few calves and they are heading to the slaughterhouse in January.

I had a conversation with Sprite. She is not adverse to letting me graze cattle on her property. She doesn't want the hassle of managing them.

My current thinking is that I could pick up 2000-to-6000 pounds of calves in the January-April time-frame and then sell them in August.

If my only goal is to keep my pasture healthy I could go with the 2000 pounds. If I want to graze Sprite's pasture as well, then 6000 pounds.

One dark-horse contender is to buy one steer-calf and train it as an ox.