Some pictures from around the place 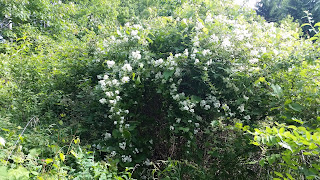 We are at approximately 650 Growing Degree Days, base 50F.

The Multiflora Rose is in full bloom. It is a good time of year to go on search-and-destroy missions to beat this plant back.

At one time, it was widely distributed by Soil Conservation Districts. It was considered prime pheasant winter food. Then it was determined to be invasive and now it is on most people's zhit-list.

I tolerate blackberries, they are native and edible by humans.

I tolerate Rugosa roses, they are well behaved and provide pollen and nectar for solitary pollinators and parasitiod wasps after the horseradish is done blooming.

Multiflora Rose, Poison Ivy and a few other species are on my eradicate list. 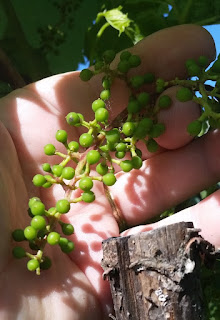 Riverbank Grape (Vitis riparia) is the most common species of wild grape in Michigan. It is an early bloomer. This photo shows the stage of development for most of the female plants. 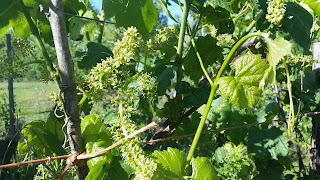 Swenson Red is now in full flower. The L50-s Vitis riparia (a Herbert Fritzke find) vine I buried to slow down its development, and then tied up to the trellis wire at 150 GDD has already set fruit. Obviously, I missed the Swenson Red pollen.

Steuben, the other grape that I thought would make an interesting pollen parent with L50-s as the female is about a week behind Swenson Red.

Obviously, if I want to "catch" pollen from these two varieties with L50-s, then I need to keep the canes buried until we have 200 or 250 GDD.

Mrs ERJ was very particular about the kind of refrigerator we bought, lo these many decades ago.

She wanted the freezer on the bottom. Her reasoning was that we access the refrigerator ten times as much as the freezer, so put the fridge in the ergonomic envelop.

Over time, the plastic handle developed cracks and needed replacement.

Looking on-line, parts were about $55.

I confess that it is difficult for me to spend money.

While walking about the local big-box store, I happened to look over and I saw something that looked very similar, in section, to the broken handle. It was $9 and there was enough material for about four handles.

In a thrice, the extruded aluminum part was in my cart.

Like Mrs ERJ says, if you can't be handsome, you can at least be handy! 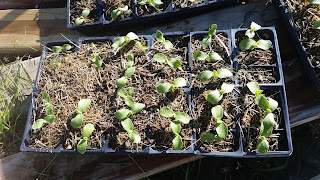 Just a few more days and then these will be in the ground.

The garden does not look very impressive. There are huge amounts of visible ground and the plants are tiny.

We could use a rain.
Posted by Eaton Rapids Joe at 7:43 PM