I wimped out and simply took video of the testing. No analysis.


Eleven second video. Damping applied to outside. Damping is 2mm of butyl rubber, a material known for energy dissipation and it is held on with radiator clamps. Three bands were installed. One at the opening (bottom in the being-used position), and one each next to where the handles are welded to the body of the driver.

The handles are involved in many of the modes. I know this because I can change the sound characteristics of the ringing by how tightly I grip the handles when driving posts. I suspect the handles are beating like butterfly wings in that mode and "pumping" the sides of the driver. That is why I chose the positions I did.

The most common source of butyl rubber is bicycle inner tube. Each layer is about 1.0mm thick.

This option worked better than I expected.


Runner-up: T-post driver with a 1.25", two-pound steel weight added to the impact surface. The weight and the driver are separated with a 3mm butyl piece.

This did not work as well as I thought it should but did slightly better than the exterior damping. 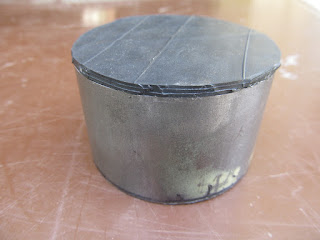 The steel weight came from This Supplier. The butyl pad was made by gluing layers of inner tube together.

While the over-all reduction was pronounced, the driver continued to ring after the impact. Touching the handles damped out the ring so it was clearly a handle mode.


Overall winner: T-post driver with 2 pounds of lead shot and oil added. In the interest of expediency, I did not weld on a cap. I turned the driver upside-down (from being-used position) and poured two pounds of #8 lead shot into the driver. Then, I impacted the outside of the impact surface.

Two pounds of shot was used because the steel hockey-puck weighed two pounds and I wanted an apples-to-apples comparison.

The experiment was repeated both with and without oil. I didn't notice any difference.

All three strategies made marked improvements to the sound level and duration.

Apologies for the shaky video and lack of analysis. I wanted to get the monkey off my back before July started.
Posted by Eaton Rapids Joe at 12:32 PM