Trying to quiet down my T-post driver 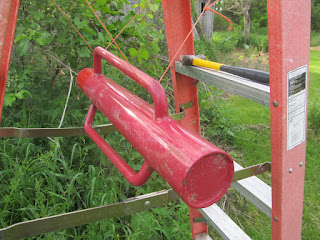 One of the first apps I loaded on my smart-phone was a spectrum analyzer for sound.

I will be playing with it over the next few days as I find ways to make a cheap T-post driver quieter.

If you ever spent much time operating one of these beauties (T post drivers) then you know they can leave your ears ringing if you don't wear hearing protection, especially if the ground is dry or rocky.

The protocol is simple. Suspend the driver horizontally but running strings through the handle. Tap the end of the driver where the T posts impact. For convenience, I am tapping the outside of the surface rather than the inside, a difference of a 1/4 inch or so.

I do not know if the instrument is reporting pressure or energy. An increase in 10 dBa indicates a ten-fold increase. A 40 dBa increase is a relative increase of 10,000.

A scientific study would use an instrumented and calibrated hammer to measure the inputs to the system. 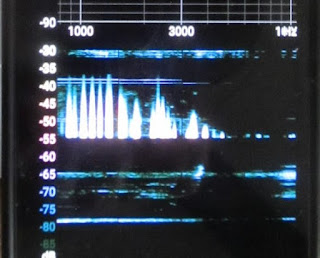 This chart is poorly labeled. The numbers along the left side refer to the COLOR. The chart itself scrolls or cascades from the bottom upward and the height of the peaks refers to how long they rang in the time-domain. The tall peaks at 3400 Hz and 3900 Hz damped out quickly but the broad band rang for a long time.

Secondarily, to see who quickly we can damp down or dissipate the duration of the noise levels.

Posted by Eaton Rapids Joe at 6:04 AM