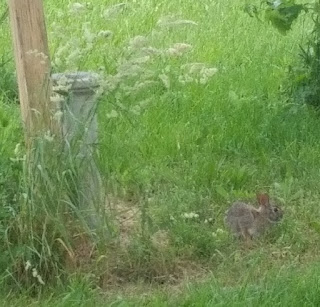 Right now, I am looking out one of our windows at a rabbit.

It is a bit frustrating. It only takes a nibble to wipe out a cucumber or honeydew seedling that has just popped above the surface of the soil. Looking down the row of cucumbers I can see where I am missing four, five and six plants in a row.

I remember...
I remember one winter when it was snowy, cold and windy.

The snows did not melt. They accumulated.

The wind blew them into drifts.

One day, I was walking through the "barn orchard" and saw where the snow level was much higher than the 24" tall wire cages I had put around the tree trunks.

The rabbits had feasted. It was my fault. I should have been paying attention.

I saw red and decided to seek revenge.

I had learned that I can attract rabbits by putting out a "book" of good alfalfa hay. I also learned, over time, that stomping down the snow so it leaves a depression with a hard, level surface, and then sprinkling shelled corn will attract them.

I didn't have any alfalfa hay in inventory that week, so I opted for the sprinkled corn method.

Shooting lanes
For those who live in urban areas, you might not realize that even out here in the hinterboonies we have to consider shooting lanes and what might be in the background.

I live in a township with 100 people per-square-mile. An actual square mile of land has about 21,000 feet of road frontage or about one person every 200 feet. Some houses are closer to the road. Others are farther back.

All that being said, after considering the rabbit trails and my neighbors, there were a limited number of places where I could put the bait and still be the optimum 60 yards away with a .22

Did I mention the drifts?

The bait station was behind a drift. I had not appreciated that fact when I invested fifteen minutes stomping it flat and sprinkling the corn. The depth of the depression combined with the swell of the drift in front of it obscured the baited area.

Never-the-less, there I was, fifteen minutes before sunset and there was not time to remedy the situation.

I had a .22 that I shot accurately. I think it even had iron sights but I had younger eyes at the time. It had a heavy barrel and a stiff, but crisp trigger.

I did not have to wait long. The rabbit must have been starving. All the succulent, nutritious food was beneath fifteen inches of gritty snow with the mechanical properties of expanded polystyrene foam.

I could just see the tiniest sliver of the top of his back when he hunched up as he ate.

Then he stood on his hind legs to look around. They do that in case a predator is around.

I could see him from his shoulders, up.

I sighted on his head and squeezed off a shot.

I waited in case another rabbit came along.

Twenty seconds later, the rabbit raised his head again. I had missed!

It was cold. I am not a perfect shot. I can make a million excuses.

I cranked off another round.

I was beginning to regret making the bait station so large. If I had made is smaller, then I could have had the gun positioned on what I was using for the steady rest rather than having to re-acquire and shift the rifle.

I wasn't really keeping track but I think I fired mumble-mumble shots.

It only took about fifteen minutes before it was too dark to legally shoot.

I trudged over to the bait station to determine if I needed to sprinkle some more corn.

There were six dead rabbits in the depression (head shots) and two blood trails heading off into the snow and beneath brush piles.

It had not been the same rabbit.

Why the quaint story?
We find ourselves living in interesting times. Times that are unprecedented in most people's experience.

As we start to grapple with these issues, it will seem like we are making no progress.

We will keep doing the right thing. We will exercise our skills to the best of our ability and it will seem like we are falling short; minute-by-minute, hour-by-hour, day-by-day, month-after-month.

Most of the progress we are making will be hidden from our sight just as the problem's growth was mostly our of our sight. The orchard-master fell asleep at the switch.

It is like dental work. It is a false economy to defer dental work for a decade but it sometimes happens. What could have been routine escalates until the fix is prolonged, painful and heroic. All that work. All that pain. All that money going into something that is not visible to most people.

Not very rewarding but it must be done or the consequences will be even more dire.

Take heart
Breath: We are in this for the long haul
Relax: Angst does not solve problems. Applying force in the right place and time does. Husband your energies. (or energize your husband, as the case may be)
Aim: Focus your efforts where you have responsibility and can have a positive effect
Slack: Every system has slop in it. Eliminate that slop so when the time comes to act you will not waste precious time doing things you could have done before hand.
Squeeze: Let the hammer drop like you shot that gun a thousand times before.

We all have our spheres of influence. We all have different kinds of expertise. We are all adults and know that doing the "right thing" will not make us popular nor will our friends and family be brimming with gratitude...at least not very often.

Do the "right thing" anyway.

Even when it appears that hope abandoned us, duty remains. It is the one constant.

Don't count the bodies and blood-trails (metaphorically speaking) until it is too dark to shoot.

Posted by Eaton Rapids Joe at 8:53 AM