Today was a running day.

I went into Lansing for a change of scenery. I planned to run from Maguire Park to Kruger's Landing and back.

So I reversed the plans. I parked at Kruger's Landing and ran south toward Maguire. I set my timer for 30 minutes. I have been running 12 minute miles and that should put me at five miles. When the timer went off I planned to turn around.

The run from Kruger towards Maguire is uphill. I was huffing-and-puffing because I wanted to get my five miles and if I lollygagged I would not have at least 2.5 miles in when my timer went off. 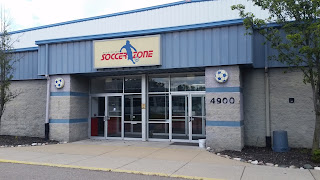 The timer went off as I was passing the Soccer Zone just south of Jolly. I almost made it to Maguire. 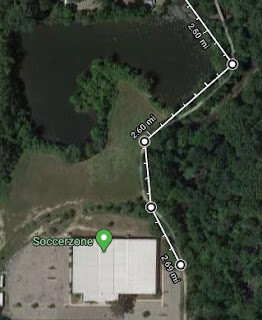 The other thing is that I got in more than five miles today. Last week I was a three mile, 12-minute-mile runner and this week I can run five miles and consider myself an 11 minute (and short change) runner.

I savor the small victories.

Frogs
I consider myself a fairly attentive observer of the natural world.

And there are times when I ask myself, "How did I miss that?" 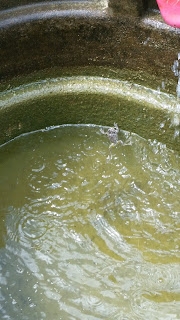 Sprite's seven calves needed to move to my pasture.

Sprite contracted to have some of her fields cut for hay. The equipment needed to go through the paddocks where the calves were grazing. It was just far smoother to move them to my paddocks while the chaos happens over at hers.

Moving the calves entails dumping the water out of the 100 gallon stock tank and carrying it a couple hundred yards to the paddock where the calves will start their rotation on my property.

The tank only weighs about forty pounds (when empty) but it is awkward. I have tried dragging it and it bites into the ground and bumps into my Achilles tendon. The easiest way to carry it is to flip it over my head and carry it in that position like a turtle's shell.

After putting in the appropriate place and dragging enough hose to fill it from Sprite's hose, I happened to look down and I saw... 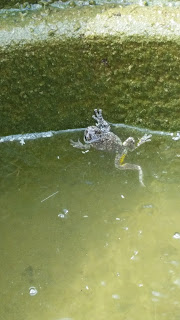 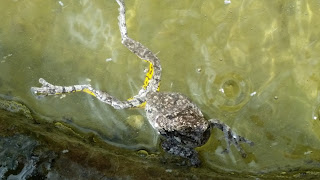 How the heck did he/she hang on to the slimy, algae covered inside of the tank while it bounced on my shoulders during that 200 yard ride? How could I not have seen it?

But there it was!