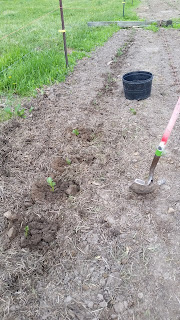 Potatoes are a wonderful crop when you want to produce the maximum amount of calories from a give amount of space.

They do have a few quirks. For one thing, it is difficult to save "seed" from one year until the next. Another quirk is that they can be vulnerable to some devastating diseases.

A few years ago I grew a variety called Missaukee

It was hugely productive and had a nice package of disease resistance.

Last year I grew Burbank Russet because I had lost my source of Missaukee seed potatoes but I remembered a few hills of potatoes volunteering where I had grown them years before.

There is a real chance most of these plants are not Missaukee. Missaukee sets its potatoes very close to the surface and that is not where these were. Also, Missaukee spuds are very round and many of these are peanut shaped.

Even if the specific plants I rescued are something other than Missaukee, they will be from a potato that has proven abuse tolerant and able to over-winter with no help from me.

I intend to keep my eyes peeled for any more potatoes volunteering in this portion of the garden.
Posted by Eaton Rapids Joe at 11:17 AM