Patterns of land-use in Europe

I had an email conversation where we discussed the different mindset many Europeans have about land-use when compared to Americans.

The woman I was conversing with lives in a rural area in Missouri.

I live in rural Michigan or perhaps the very outermost fringes of suburbia.

My partner-in-conversation attributed the difference to Europe not having a "pioneer ethic". European society is a tightly orchestrated dance much like the mechanism of a wind-up clock. Things have to mesh.

Over here, at least in the more rural areas, there are few restrictions on swinging our arms because noses are few and far between.

Formed by our histories
I had a boss who had been sent by the company to review European operations.

In a private conversation he shared that European cities were markedly different than American cities.

In an American city, it is difficult to know where the city limits are based on land-use patterns.

In Europe, he claimed, you could tell to-the-meter where the city limits were. The land-use went from developed/residential to agriculture.

Further, he said most residents lived in apartments and folks walked or rode public transportation to work.

That is what we call a testable hypothesis.

In the United States, I choose Lansing, Michigan because I am familiar with that city.

In Europe, I will use Graz, Austria because it is sort-of similar to Lansing and Austria is a land-locked country.

Population density of about 3000 per square mile and evenly distributed across the area of Lansing. 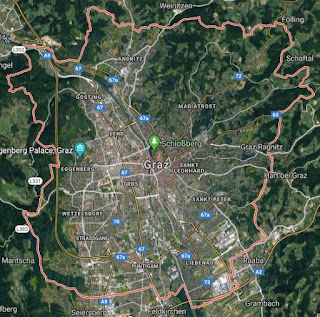 The population density in Eaton Rapids Township is about one person every 270,000 feet. That paucity of people is mind-bending to many Europeans and so is the fact that we can buy property and build in places like Eaton Rapids without obtaining government waivers for converting agricultural land into a mowed lawn.

Looking at the land-use at the city limits the difference between "in city" and "not in city" is much clearer in Graz than it is in Lansing.

History
Through much of history, Europe was convulsed in wars every thirty years. It appeared that every 1.5 generations had to relearn the same painful lessons. No lesson has more authenticity than your own scar-tissue or missing limb.

One of the major lessons for a land-locked country is that you cannot always rely on the efficiencies of Guns-or-Butter division of labor. You may make the best firearms in the world but it is for naught if you cannot feed your population when adversity on the battlefield limits your access to ports controlled by other countries.

A white-knuckles, subsistence diet of 400 pounds of maize a year requires 6000 square-feet-per-person. That assumes an unfertilized, non-hybrid yield of 40 bushels per acre.

Could they/Would they?
People do surprising things.

It is impossible to say what would happen. Some would. Most would waffle. A few would decide it was easier to steal from those who planned, scrimped, invested, sweated.

Apropos of nothing in particular; it is worth noting that protein can be recycled by passing it through a laying hen and many times the manure is easier to spread than the original protein source. Furthermore, some plants like pears and apples become more susceptible to diseases when manured with too much high-Nitrogen manures. Better to save those manures for corn (maize), cabbage, potatoes, turnips, kale and other greens.
Posted by Eaton Rapids Joe at 10:13 PM