Dog in the manger

I heard an interesting hypothesis today.

I consider the person who shared it to be a deep thinker. He is the kind of guy who uses words like "nascent" in his mental self-talk. He dumbs down when talking to me.

What he described was very much like Aesop's fable of The Dog in the Manger.

He is still constructing this image in his head, so I might be taking this in a different direction than where he is heading.

He proposes that the youngest generation of adults sees "Boomers" as having wealth that they will never have.

And that makes them angry. That disrupts their ability to think in a rational manner.

Consider the Dog in the Manger story. If the dog persists in keeping the cows away from the manger, then there will be no milk to lap from the bowl, nor meat and bones for the dog to eat.

But the dog is incapable of thinking that far ahead.

Getting to cases
Recent history prices residential property in Seattle, Washington at $517 per-square-foot.

In the year 2000, the average American consumed 840 square-feet for residential purposes.

That works out to about $430k per person or $300 Billion for the City of Seattle.

That does not include commercial property or the contents of any of the buildings. 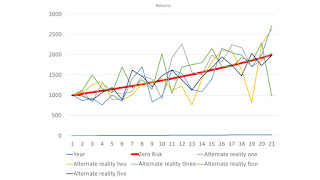 This concept makes the most sense when described backwards.

Suppose most people would be willing to accept 3.5% return for a completely risk-free investment vehicle. Before you get excited, I consider inflation to be a risk, so that would be 3.5% AFTER inflation.

Now, suppose there are other, alternative, investments that are not risk-free. The underlying fundamentals suggest that it should double in twenty years but there is a random, roll-of-the-dice component added to, or subtracted from the base rate-of-return.

In fact, that is what the other five lines are. They are the same red line with a norm.inv function using a standard deviation of 20%.

A cold-blooded computer might consider all the curves to be the same because you cannot know, before the fact, whether the jittery lines will be above or below the solid red line. Both events are equally likely.

But as humans, we must consider the fact that we could have chosen the thin green line and lost the use of our money for twenty years and received no return for that loss of use.

Or what if we are forced to sell early, just when the value tanked? What if we could not afford to wait for an up-jog? This happens more often than random statistics suggests. The local economy tanks. We lose our job. Real estate prices go into the toilet. We must sell our house in a crappy market and buy another house in a city where the economy is booming. Selling low and buying high is not a formula for wealth building.

So, given the dynamics regarding the possibility of being cornered into making a distressed sale, the only way a buyer can guarantee getting a positive return on their money is to pay significantly lower prices for properties in highly volatile markets compared to what they would pay in markets with low volatility. Instead of offering $517 per-square-foot as the basis for a buy-offer, the prospective buyers might offer $200 per-square-foot.

The market determines prices. Markets arbitrate between a population of sellers and a population of buyers to determine prices. If the majority of the buyers choose to not offer more than $200 per square foot, then it does not matter what the sellers demand. The price becomes $200 per-square-foot.

In this scenario, the "wealth" represented by Seattle's residential housing stock dropped from $434,000 per person to $168k. Said another way, social unrest has the potential to evaporate $265k of wealth, per-person in Seattle. And that is just the wealth represented by the valuation of residential property.

And they were enabled by the politicians and bureaucrats who run Seattle and its sister cities.

History will turn on whether the voters who enter the voting booths in November blame Trump or blame the leftists politicians who pandered to extremists instead of doing their jobs.