About that systemic racism by the police...

I used to have a boss named Ron. Ron was responsible for the maintenance of a very large bodyshop in an auto factory. By my count, it contained something over 800 robots and the conveyors, welders and positioning equipment to match.

Ron (not that I ever addressed him by his first name) contended that 80% of the time, his organization was capable of "fixing" an equipment problem on the first visit.

He cautioned that 20% of the time the problem would get worse after his organization touched the equipment.

Ron's honesty was breathtaking. Everybody else was cheerleading "continuous improvement". Ron's realism served as a reality check. Almost-good-enough might look like plenty-good-enough in the rear-view mirror if your improvement project was the one-in-five that went into the ditch.

Ron wasn't blaming anybody. Automobile factories are complicated. Old equipment has quirks and history. Different skilled tradesmen have different, sometimes non-standard ways of fixing equipment. That strap might be the only think keeping the trolley on the tracks.

My take-away was that some unavoidable percentage of high-stress encounters will go in-the-ditch. People's judgement is befuddled with adrenaline. People are running their spurs into you to act in certain ways. You will not see or hear things that are as plain as the nose-on-your-face due to the tunnel effect.

Systemic racism
This chart is floating around the internet. It shows that men are vastly more likely to be killed by the police than women.

It shows that Black men are twice as likely to be killed by the police than White or Latino men. Note that this is a population-adjusted metric (per 100,000)

What if we started thinking like Ron. What if we could adjust the number and use the number of interactions with the police, by race, as the denominator rather than just the gross population? 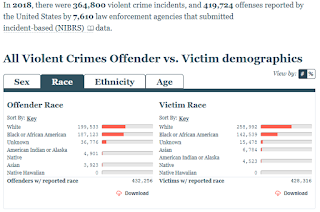 According to the ever-helpful Wikipedia, 73% of Americans identify as White (which includes most Hispanics) and 12.7% identify as Black.

Combining the two pieces of information, according to the victims who chose to report violent crimes, Blacks are 5.25 times more likely, on a per-capita basis, to commit crimes the FBI classifies as "violent". 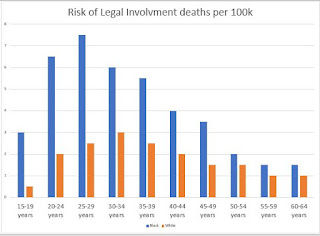 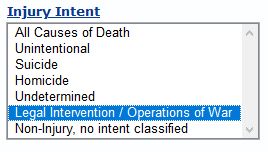 I took the liberty of mining the data for Black men and White men and binning it by five-year silos. I also adjusted the per-100,000 data to reflect the odds of death due to "Legal Intervention" happening to a given individual over the entire five-year span.

Two things should jump out. In aggregate, the odds of dying at the hands of the police are twice as high for Black men than for White men but the only age group where they are FIVE TIMES higher are for the 15-19 years age-group.

According to Ron-think, Black men are not being unfairly treated by the cops. If anything, they are less likely to have an issue on a per-occurrence basis.

I was surprised. I had a flawed mental image. I would have expected the highest risks for both groups to straddle the late-teens and early-twenties. Perhaps it is because offenders with a history are more likely to vigorously resist arrest because they have more to lose in terms of sentencing.

Is the analysis perfect? Of course not. Violent crimes are a small sub-set of police interactions with the population. However, it is the riskier sub-set. After all, the perpetrators have already demonstrated a willingness to be violent and the police take that into account.
Posted by Eaton Rapids Joe at 7:31 AM