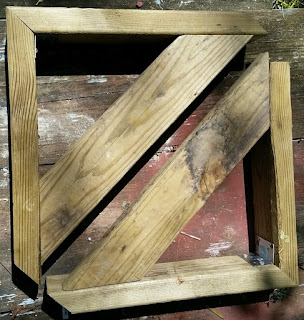 Today's adventure took me outside of my comfort zone.

I do not consider myself to be a competent carpenter. However, that is where today took me.

I received a call last night from somebody who falls beneath the ERJ protective umbrella. They had dropped $600 on two air conditioners and could not figure out how to install them.

The house is on Lansing's near-south side and has 1920 vintage housing.

I punted on the second story unit. I went to Lowes and bought a commercial, metal support bracket. If I am going to install things overhead where they might fall and hit somebody on the head, then I want an engineered product backed by a company with liability insurance.

The ground floor unit got the fabricated, wooden brackets.

Cautions about the wiring (and fuses) not being able to support the added load bounced off.

While installing the unit on the second story I figured out why the duckling's efforts crashed and burned. The window casing was aluminum. The self-drilling/tapping screws that came with the "economy" bracket they purchased were not up to drilling through 0.060" of aluminum, at least not when hand-turned with a Philips screwdriver.

I left the wooden brackets and I pre-cut some treated 2X4s to scab beneath the window and tie into the studs. The ducklings wanted to give it a shot.
Posted by Eaton Rapids Joe at 7:07 PM