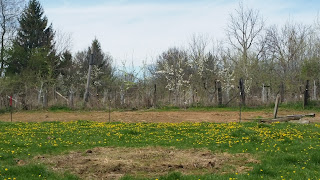 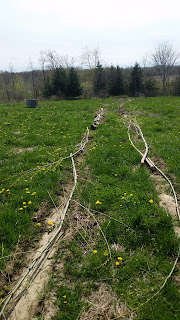 The ruts in the pasture are filled with trash to slow down erosion.

The swallows (presumably Tree Swallows) are back. 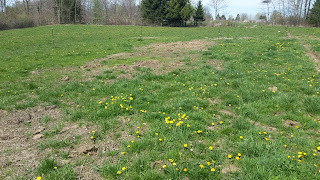 My pasture is slowly recovering from the beating it took last winter. 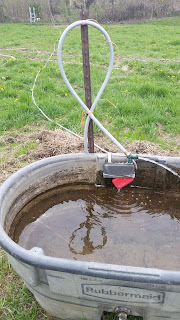 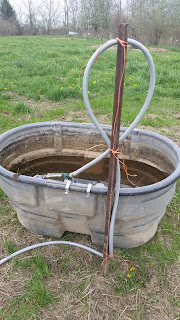 We were getting ready to move Sprite's cattle. She said they looked restless.

This was Captain's set-up for water. He had the typical toilet-bowl float, automatic shut-off. He also had a "Y" splitter screwed into that. When he moved paddocks he could more quickly fill the stock tank by opening the other branch of the "Y". Then, once full, he shut it off and relied on the float valve.

Incidentally, the tank was full of mosquito wigglers when I dumped it before moving.

Getting the calves ready to move, it became apparent their restlessness was due to a raging case of mange. That is why they were rubbing and pushing the fences.

The Captain poured all kinds of strange substances on his cattle to control mange, including old, used motor oil and cheap vegetable oil. My preference is to give them a solid dose of Ivemectrin pour-on and call it good. This is going to be Sprite's call.

I would love to hear from any of my readers if they have those flowering in their area of operation. I would also appreciate the closest large city or a zipcode so I can look up the growing-degree-days.

Being able to predict when the first Ruby Throated Hummingbirds will show up based on phenology and growing-degree-days would be cool. 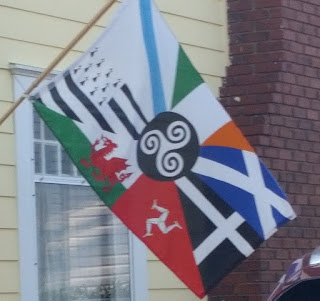 This flag is a puzzler. I see Irish stripes at the top. A Welsh, rampant dragon near the bottom. A couple of three-legged swastika and two crosses.

Any guesses? Maybe a flag celebrating polytheism or the British Isles?