Bella got her flowers planted today

Bella used a flower I never heard of before: Gazanias. She had some tried-and-true heavy-lifters. She had petunias, marigolds and nicotiana. She also had Gazanias.

It is good to try new things.

I saw something odd while grafting 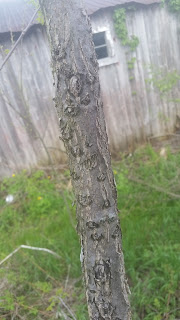 Apologies for the crappy photo.

This is the stem of a Black Walnut. Is this sapsucker damage? I wonder if it impacts the grain of the wood.

I am down to grafting the last of my Heartnut scion (Thanks Lucky!!!) and my last Shellbark Hickory scion.

Pulling off the bags 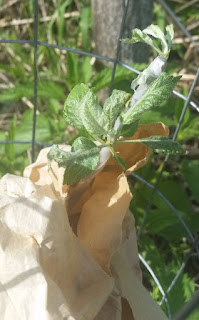 It is about time to start pulling the bags off of trees grafted two or three weeks ago. This is an apple I grafted to a seedling I want to take a closer look at. The apple resembles a large, later version of Gala.

Gala is an apple with outstanding flavor but it loses that appeal in storage. It is still a competent apple after two months of storage but it no longer carries the aromatics that give it identity.

I think there is a market for a Gala-type apple that retains those flavors later into the season.

I don't know if this seedling is "the one", but I made a couple of copies of it to reduce the risk losing this genetic combination in the event of the original ortet dying.

Now I need to start making cages of poultry netting or welded wire, otherwise the deer will strip the tender new growth of the trees I grafted.
Posted by Eaton Rapids Joe at 5:10 PM