Looking at yesterday's confrontation from the standpoint of the home-owner 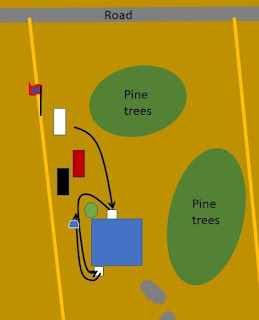 Having admitted that I was stupid, today we will look at the other guy's actions.

The image above is a to-scale drawing of where the flag was flying upside down.

The house is the blue square. The small white squares are the front and back porches. The white rectangle is my vehicle. The black arrows are my path. The blue half-circle is where I was when I realized that things were going sideways.

At this point I am walking north toward my truck and 140 feet from the road. 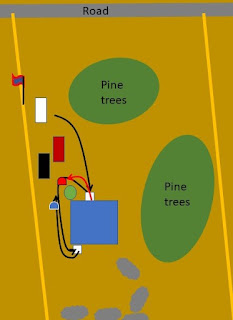 And there was the home owner. The red arrow is his presumed route. 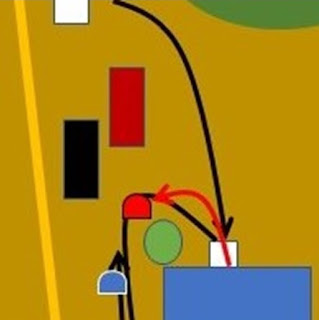 Let's play with other potential endings to the story.

If you take a concealed weapons class, they will instruct you to stay in your house and call 9-1-1 if you think you are in danger. They repeatedly state that you should not "go out" and confront the "danger".

Why? What bad outcomes could happen? Let's look at some potential outcomes from the perspective of the armed home owner.

You lose that advantage when you pursue the stranger.  In a high stress situation, a stranger less than 21 feet from you is a high pucker-factor encounter.

If everybody knows the rules and does the dance then we are both lucky and we end up with two people with elevated pulse rates.

Potential Outcome Two: The stranger does not see you and continues toward his vehicle closing the distance between the two of you. Maybe he is wearing earbuds. Maybe he is hard-of-hearing. Maybe he is obtuse. Even more likely he is a kid and panics when he sees you. He makes a break for his vehicle which has him run right over the top of you.

The best you can hope for is to shake the legal entanglements in a year and for $100k.

Potential Outcome Three: The stranger is still in your back yard. You come upon him unawares. Things go sideways. You show him the muzzle of your gun or maybe even shoot him. Technically, you stalked him...you closed the distance from +70 feet to bad-breath distance...you hunted him down and threatened him with deadly force or actually shot him.

Trespassing is not a capital crime.

From your perspective, you were trying to figure out where he is by following the way he went. From the perspective of the prosecuting attorney, you trapped an innocent civilian by sealing off the one path they knew to safety, thereby guaranteeing a confrontation.

Dude, you just committed a felony. You can kiss your guns good-bye.

Potential Outcome Four: The stranger really IS a bad person and is armed. No matter how stealthy you think you are, there is still the chance the bad guy will have his gun up and pointed at you while you are carrying yours at low-ready. The best you can hope for is that he is a truly rotten shot. Most likely, you will both be wounded.


My motivation for writing this post
There are a lot of ramifications in these kinds of situations and there isn't time to run through them in your head.

But don't take the advice of a random blogger. If you are going to keep a gun in the house for self-defense, take a concealed weapons class from a qualified instructor.
Posted by Eaton Rapids Joe at 10:33 AM