Things I am Jonesing for

A size comparison between a compact Ruger American and a Mossberg 500 with a rifled barrel.

The Mossberg has a cantilevered scope mount which is more vulnerable to bumps and the barrel-to-action joint is much more flexible than any bolt action rifle. The Mossberg also has a 9 pound trigger.

There are many factors that make shooting a 12 gauge accurately difficult.

One of the big attractions is the ability to reload the ammo, something that is difficult for premium, saboted, 12 gauge loads.

Cases for .350 Legend are dirt cheap and the bullets run between $22 and $36 per hundred. In other words, between two-and-three times the cost of reloading a .223 Rem or 9mm Luger or less than one-quarter the cost of saboted 12 gauge slugs.

Inexpensive ammo means the hunter can shoot more and the firearm becomes a seamless extension of his/her body.

The Savage Axis II, Mossberg Patriot and Ruger American are all cost effective rifles available in .350 Legend and .450 Bushmaster. 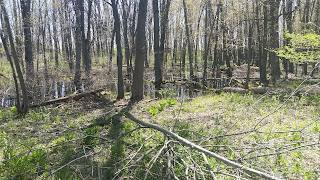 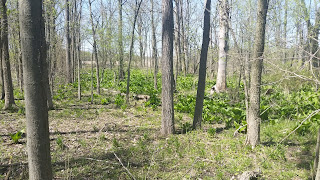 My part of Michigan has large numbers of wet spots that are not suitable for agriculture. Mostly, they have grown up into Silver Maple and Ash (dead and dying). There are also a few, scattered Swamp White Oak, elm and hackberry.

There are also large numbers of shallow ponds where the fish freeze out on a regular basis.

The plant communities are impoverished because of fires, running livestock in them and succession shading out a multitude of species. 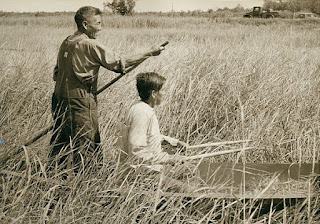 What would be cooler than re-introducing wild rice?

Obviously, the Silver Maple would need to go. But imagine what a draw it would be for ducks and whitetail deer.

It is too late to pull the trigger for this year...but maybe next fall.

Melons are a good choice for those corners of the garden that did not get planted.

This spring is shaping up to be a cold one. Virtually nothing will be happening in the garden for the next ten days as nights plunge into the twenties night-after-night-after-night.

The advantage of melons is that they sprawl and can cover a great deal of ground. Another advantage is that they need warm soil to germinate so there is no point in planting them before June 1st. By then, most gardeners are wiped out and just want to be done. Plant the melons and then have a beer. They will spread.

Potatoes
I was caught flat-footed this year. Consequently, there were no seed potatoes to be found by middle of April.

So, I am planting potatoes from last year. I had the hots to grow Lamoka or one of the MSU chipping potatoes. Potatoes selected for potato chips are enormous producers of medium sized potatoes that keep AND have high specific gravity.

As the great philosopher Jagger said, "(we) can't always get what we want"

The new garden has seven rows of 60 feet laid out for potatoes. I am planting at 15" centers.

Planting the hills far apart makes for larger, but lumpier potatoes. I like larger potatoes because they peel faster but are lumpier. They also become vulnerable to Hollow-heart when they get too big.
Posted by Eaton Rapids Joe at 9:21 PM