Let me start out by saying all four of these cartridges are more than capable of killing Whitetail Deer by the truck-load.

I, personally, killed a 140 pound Whitetail with a .357 Magnum. The 158 grain hollowpoint was traveling at a very pedestrian 1100 fps at the muzzle and was undoubtedly moving slower when it hit the deer.

The bullet was a pass-through and the deer left a blood trail Stevie Wonder could have followed. It went 200 yards before saying "Good Night".

If a .357 at 1100fps can do it, any of the candidates can kill deer when fired out of a rifle with appropriate projectiles.

First, you have to hit the target 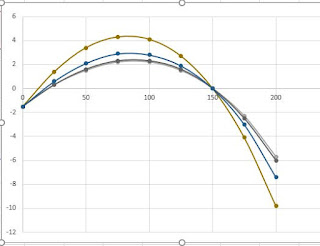 Trajectories of all four candidates are similar. The .44 Magnum is the outlier because I used 265 grain bullets for this simulation. There are lighter bullets that can be used that would make the trajectory indistinguishable from the others.

Ammo availability
The other three candidates beat the .350 Legend six ways to Sunday.

Cross-platform capabilities
The  other three candidates are widely available in bolt, lever and single-shot actions.

The .350 Legend and his big brother the .450 Bushmaster are available in bolt action rifles and modern sporting rifles.

Meanwhile, I will be training the grand-kids if/when. Muzzle-loaders and single-shots are great for training young hunters to not spray-and-pray. Bolt action rifles are next. The .350 Legend doesn't have much recoil.

That makes the .350 Legend a promising choice for new hunters and old guys who don't need lots of recoil to prove they are a man.

That ammo availability thing...
Will it be a fizzle? Easily, three-quarters of new entries to the market are fizzles. How do you justify an Magnum in .323" when it is bracketed with a half-dozen Magnums in .308" and three more in .338"? And, in the final analysis, what can any of those Magnums do that the 30-06 cannot do with modern powders and projectiles (.338 Lapua Magnum excepted)

The ecological niche that the .350 Legend is pushing its way into is almost unpopulated. The .30 Carbine is not legal in Michigan (and several other states) because it is too skinny. As noted earlier, the only other entries are .450 BM, .44 Mag and .357 Mag

Unless the laws in the mid-Western states change to allow centerfire cartridges with shoulders, I think there is a better-than-50% chance the .350 Legend will hang on.
Posted by Eaton Rapids Joe at 8:11 AM