Filing off the front site

The question came up "Why would anybody ever want to file the front site off their handgun?"

The short answer
I was being a jerk. Howard Brewi laughed it off and maintained the high road.

The longer answer
It happens on a regular basis that folks from the more urban states decide they were born in wrong century. They sell their house and move to Montana, Wyoming or, especially, Alaska. 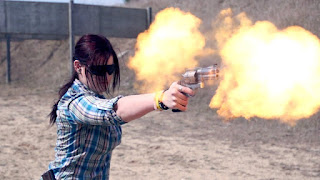 The first thing they do upon landing in their new, adopted state is to head for a gun store where they purchase a powerful handgun as protection against bears and wolves.

Then they buy twenty rounds of "Bear Ammo" and call it good.

At that point, the proprietor having deduced that the gun buyer is a tenderfoot asks "Dontchya wanna buy a file, too?"

The tenderfoot is confused. "Why would I want a file?"

"So ya can file off the front sight." the sales person informs them.

"That way it don't hurt so bad when the bear (or more likely, the 118 pound Alaskan native girl) takes it from you and jams it up where the sun don't shine."

The point
The point of the story is that .44 Magnum revolvers (and their big brothers) are difficult to shoot effectively. Being able to pull one from a holster regardless of posture, form a sight-picture and rapidly deliver multiple hits-on-target is a perishable skill. I am not saying it cannot be done. Just that it is something you have to work up-to and then maintain.

A box of twenty, 300 grain, hard-cast, soup can loads isn't enough ammo to gain that skill. And the fact that the newbie didn't buy eye and ear protection informed the sales person the newbie has no intention of shooting a single one of those $2.50 bullets.

The newbie sees owning a .44 Magnum or .500 S&W Magnum as possessing a talisman that magically confers invincibility. That is, until they run into a 118 pound, Alaskan born girl.

So, I apologize, Howard. Thanks for being a class-guy and not siccing a local girl on me.
Posted by Eaton Rapids Joe at 11:03 AM