Terminal ballistics is the science, some would say art, of what happens after the bullet hits the target.

The Law Enforcement community suffered a traumatic event when the FBI had a shoot-out with some bad guys in 1986 in Miami. The ammo used by the FBI was the best available according to the anecdotal evidence of the day. It did not live up to expectations.

That led to an effort to quantify, in a testable way, what law enforcement required from the terminal ballistics of issued ammunition.

Two key words that often get missed are the words "law enforcement".

For example, the FBI determined that issued ammo had to be able to defeat various barriers like plywood and automobile windshields. They also determined that it needed to penetrate a minimum of 12" of soft flesh.

Why are those "requirements" less likely to apply to Joe Lunchbucket defending his home?

The incident that precipitated the review involved a team of law enforcement officials in a fire-fight with the bad guys. Some of the team pinned the bad-guys down while others of the team maneuvered to get a clear shot. That "clear shot" involved penetrating intervening barriers and the projectiles did not have enough energy left to incapacitate the bad guys.

As a civilian it would be a rare event where you are shooting at targets behind barriers. For one thing the barrier could be obscuring other, innocent people. For another, that barrier muddies up the claim that your human target is an imminent threat to you or yours unless you are trying to shoot through a windshield and hit a driver attempting to run you down. An aggressive prosecutor will claim that you should have been putting distance between you and the threat rather than shooting back.

The 12" rule is another "requirement" that applies more to law enforcement than to the civilian. 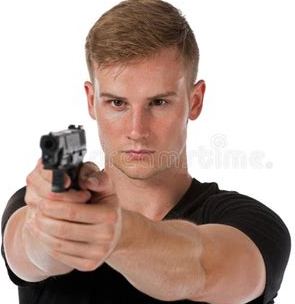 After that, the bad-guy was not an aggressor and he went on to expire six minutes later from internal bleeding.

The after-action-report speculated that it is possible for a motivated aggressor to continue the fight even after the forearm of one of his shooting arms has been destroyed.
The section shown above is from The Visual Human Project. A cadaver (a mass murderer from Texas) was frozen in gel and was shaved down a millimeter at a time. This is a section through his chest at the elevation of his heart. It is a graphic way to determine "How much penetration?" is enough to compromise the lung-heart cavity. The angles that demanded the most penetration are raking shots from the rear. As a civilian, those shots might be tough to justify to a jury.

The other place where 12" or more of penetration is warranted involves shots that hit the bad guy in the hip. Lots of muscle to penetrate and big bones to break. Shattering those bones is a show stopper. Hits here, sometimes called Yankee heart-shots, might be useful in a firefight where the bad guy took shelter behind a vehicle but are of marginal utility to the civilian home owner.

That is true for handgun cartridges of 9mm and higher. It is much less true for smaller and higher velocity cartridges like the 5.56X45mm NATO round.

The point is that experts suggest that you need to run 200 rounds of any given type of ammo through your firearm to gain confidence that it will feed and cycle with high reliability. That means ten boxes of ammo just to see if the stuff will work in your rifle.

Running 200 rounds through the firearm also give you a fighting chance to pick up the muscle memory to run the firearm without being slowed down by the need to check the manual when things go bump in the night.

Like every other opinion on the internet, this opinion is worth exactly what you paid for it.