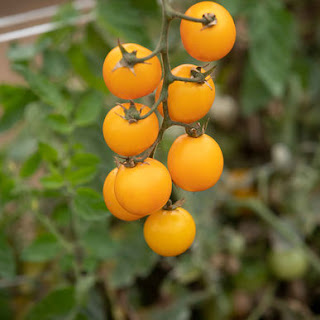 Cherry tomatoes
65 days from transplant. High in vitamin C. If you lose a few fruit to splitting or insects, it is not a big deal. Indeterminate varieties have a longer fruiting period and can scramble over other plants. Said another way, indeterminate, cherry tomatoes are good choices for casual and guerrilla gardening. Determinate, or bush types tend to have one big crop.

I have seen jungles of cherry tomatoes growing wild on sandbars in the Red Cedar river. That was before the storm drains were separated from wastewater sewers.

A couple of decent choices are Black Cherry and Gold(en) Nugget both with 42 micrograms/ml of vitamin C. Both are readily available in commerce. An old Italian variety, Sponzillo, boasts 65 micrograms/ml. As a class, cherry tomatoes are richer in vitamin C than full sized tomatoes.

Strawberries
Produce fruit the next spring from planting. Leaves are a rich source of vitamin C during the winter months when few green leaves are available to "beef up" tea.

Sensitive to competition with weeds.

Black Currants
Chose varieties that are not alternate hosts to White Pine Blister Rust. Those include Titania, Consort, Ben Lomond, Ben Nevis, Ben Sarek.  Titania is a tall plant and easy to pick.

In the north, they yield more in full sun but are less fussy than many fruiting plants about partial shade. They also appear to be poor drainage.

Tree fruits
Tree fruits are close to my heart but I have reservations about recommending them, primarily due to the time lag between planting and first harvest but also due to the amount of care, i.e. spraying, required to get a crop. 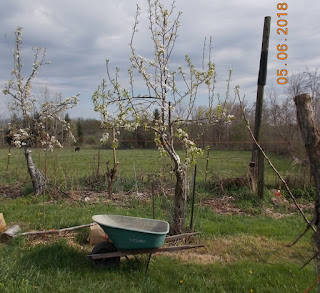 Asian pears, as a class, are about as bulletproof a prepper tree as you are likely to find. Naturally of short stature and precocious. Disease resistant and surprisingly bug-free, Asian pears should be on the prepper's short list.

Mrs ERJ's favorite variety is Chojuro. Korean Giant and Shinko are other good choices with Korean Giant getting the nod for flavor.

American plums are also a "sleeper". As a native fruit they are relatively care free. They don't bear heavily every year but that may be due to lack of attention. Most unselected varieties are "spitters" but you will find some better specimens if you keep looking. South Dakota is a named variety and Potawatomi plum is a seed-grown strain that was once common in Utah.
Posted by Eaton Rapids Joe at 11:38 AM