Never lost a foundation yet

Reader John commented in the post on Violent Flash Mobs:

I recall reading the Bracken article when it was first published - thanks for the link. It holds up on the re-read. My question is how much preparation is in place now for the riots/mobs? I think the caravan has shown us that tyranny is very well organized.


My gut feel is that the powers will write off vast swaths of America when the shit goes down. 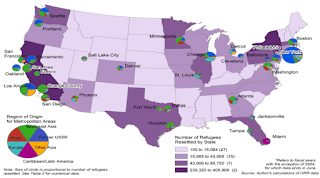 Migrants and refugees are typically relocated in metropolitan areas for ease of providing services.

Most African refugees, for instance, landed in Minneapolis-St Paul, Atlanta, Washington DC and San Diego. Is it possible that they were placed there due to the proximity of world-class medical facilities (Mayo/U-Minn, CDC-Emory, Johns-Hopkins and so on) to identify and contain potential diseases?

While it would be epic karma if Ebola were next found in the DC metro area, let's assume it shows up in Minnesota or Dallas or Atlanta. For the sake of argument, let's say this happened in Minnesota.

Likely it will be found when some seventh grade kid in the Lutheran sports league collapses during a fast break and spews bloody mist into the air. The video will make Facebook. The medical investigators will find that the kid is patient twenty and there is not a snowball's chance of getting our arms around all of the contacts.

In two days there will be no more food shipments into Minneapolis-St Paul and 40% of the population will have decamped to "the cottage". Or perhaps their family in Chicago. Maybe they will hop on a plane and fly to LA.

In a week Chitcago will be abandoned. There are not enough police or military to hold the line. It is not defensible. Too many means of egress in-and-out.

Did it strike you as strange that Obama did not move back to Chicago where he is revered like a saint? Odd, that.

The tyrants will castle up in Washington DC and a few other places. The people in NYC assume they are one of those places but odds are that it is not.

80% mortality means near 100% mortality in cities because the infrastructure will dissolve like toilet paper in a hurricane.

That will happen to a smaller degree in Rednecklandia. In those places where people can do a little bit of everything. We might not do it well, but we can run fork-trucks and garden and shoot guns and run IVs and wiring and plumbing.

Areas with organic political structure will be able to re-assemble order. These will be communities with leaders who can project personality and have character equity. In Eaton Rapids, I know that if Paul Maleski promises me something he will do everything in his power to deliver. If Paul said, "We need to put together a militia and engage in mutual aid." there might be much jibber-jabber but it will be done. And if Paul were to fall to the plague, there are a dozen others standing behind him capable of picking up the flag.

Areas where political structure is nourished with graft, corruption and spoils will roll-over when the feed trough is empty. I don't see enough people ponying up and self-organizing to deal with their 75 psychopaths.

Your core question was: "How much preparation is in place now for the riots/mobs?"

My gut feel is that the tyrants have a default plan to let the building burn down to the foundation.
Posted by Eaton Rapids Joe at 6:36 PM