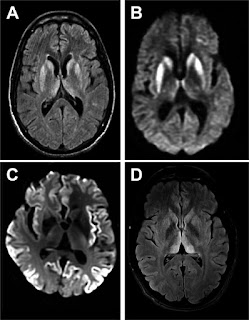 A prion is an abnormally folded protein that is transmissible between animals and between species.

Prions are the causal agent in Mad Cow disease, Scrapies (in sheep), Chronic Wasting disease in deer and elk and a form of Creutzfeldt-Jakob disease in humans.

Prions are incredibly durable, presumably due to their simple structure. Mad Cow disease in Britain became an issue because the normal cooking procedures for recycling slaughtered animal wastes back into animal food did not kill the prions that were in the central nervous system.

Mad Cow disease had a devastating effect on the British cattle industry as the EU refused to accept exports from Britain.  Departments of Natural Resources are trying to get their arms around Chronic Wasting disease before it is documented as Mad Cow disease in the US cattle herd.

Loss of the ability to export beef and dairy products would have a devastating effect on the already teetering farm economy.
Posted by Eaton Rapids Joe at 6:44 AM