My parents get great joy from their TV.

They alternate between EWTN and various news stations. Mom is a news junkie.

EWTN has religious programming with a strong Roman Catholic slant. They air the Catholic Mass daily. Consequently, on days when we are doing eldercare we get the benefit (no sarcasm) of hearing the Mass and the daily readings.

Thursday's readings were from Matthew 7:24-27


Listening to this as I was cutting up the dried fruit to put into Mom and Dad's daily oatmeal I was hit with an insight: Jesus was standing at the edge of a dry wash (or wadi as they are called in that part of the world) while he was preaching.

For those who are unfamiliar with deserts, most deserts are rocky and have very little sand. If you want to find a bed of sand you must go to features that were formed by rushing water. There you will find beds of sand and sand-bars. 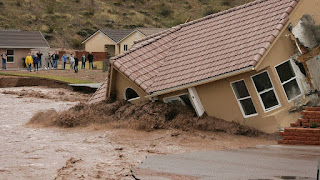 I had been carrying around the image of "building on sand might be hazardous" while the message from the dry wash is that the hazard of building on sand is an absolute certainty. 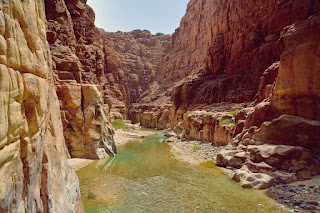 A message that is more deeply layered in the short parable is the mention of rock.

Wadi with rocky sides tend to have very steep sides. The builder of the house will not be able to climb out of danger when the floods come. He will be swept away with his house.

The builder might think he will be able to escape in the 11th hour but those hopes are delusional. If Jesus told this parable beside a wadi, then his listeners would not have thought the builder-on-sand as unwise, they would have known him to be suicidal.

A five minute video of a flash flood in Utah. The videotographer does a good job explaining the dynamics of the flood.

Posted by Eaton Rapids Joe at 7:50 AM