A few notes on fleet vehicles 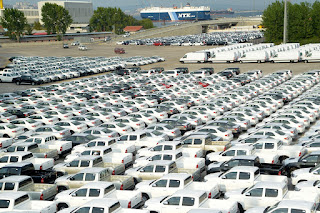 Can you say "fleet sales"? I knew you could. My son recently bought two work trucks. Roll-down windows, no radio, stripped as it could be. Cruise control is an optional item. Fleet sales have basically, sedans, pickups, and vans. Generally one color (white). But the price is very attractive, and they'll sell you one or a hundred.

I want to discuss the economics behind the auto company's decisions to make and sell vehicles to fleets. As always, I am representing myself and these are my observations, not official positions of any automaker.

Economics
The bean-counters amortize the fixed costs of a new car program against a guess of future demand. Suppose they figure five years of production in one auto plant capable of making 200,000 vehicles a year. That would be a million vehicles

Let's speculate that the total fixed cost of the program was $4 Billion. That includes engineering, tooling, compliance costs for all markets the vehicle will be sold in, yada, yada, yada. That works out to $4000 of fixed cost per vehicle, ($4B/1M)

If the corporation determines that there is sufficient demand for the vehicle and if the factory floor space is not in high demand for other products then the bean-counters might advise that the vehicle be produced for a sixth year.

Risk minimization
There are times when the assembly line is stressed. Examples include after shift-area preference moves, when new product is introduced to the line, after a shut-down.

The schedulers are likely to run a schedule that is rich in "base" vehicles as a way to minimize risk. It gives operators time to cycle through their job and get solid before adding complications.

Concave pricing curve
Suppose you had an assembly line that built both Chevy and GMC or both Toyota and Lexus vehicles.

Even if the vehicles were identically optioned, the up-level marque will command a significant premium in sales price.

Consequently, the factory generates more revenue for the company if it produces a maximum number of maximum-optioned, up-level marque vehicles. The problem is that there is not enough time-in-station to build all max-optioned vehicles.

So rather than slow down the assembly line, the schedulers "chase" the maxed out vehicle with a plain-vanilla, Chevy or Toyota so operators can "catch up" and not get swept out of station.

The issue with being swept out of station is that it vastly increases your walk time and you will start bumping into operators in the next station.

Why white?
White hides minor metal imperfections like small dents and dings better than any other color. It is also inexpensive paint compared to red or anything with metal flake.

One of the bottlenecks in the factory is the final quality inspection. There will be enough other issues that you don't want to jam-up that final gate with avoidable paint issues. The minor dents and dings might be there but if the quality inspector can't see them then neither will 95% of the customers.

Another reason for white is that fleet buyers who used to order custom colors figured out that they get more money on resale when they stick with a standard color. Municipalities who used to order odd shades of yellow and orange now order white because their bean-counters told them to.

Summary
As a retail customer going to a car lot you might have some leverage if you looked at white cars and trucks.

You can look at the last six digits of the VIN and that is typically the sequence number for that model year out of that factory. If the number is low, less than ten thousand for instance, then that vehicle has probably been sitting on the dealer lot for a while and he is sick of looking at it. 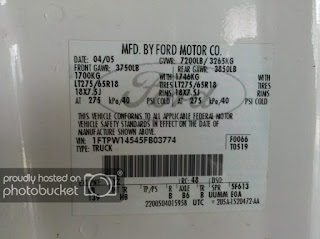 Some manufacturers also list the build date or build week on a sticker on, or near the driver's side door. The internet is your friend if you need help decoding the sticker.
Posted by Eaton Rapids Joe at 10:00 AM