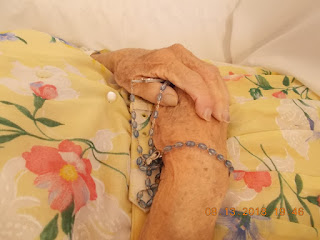 By the time you get into your 90s, you don't have a lot of peers left.

Most of the guests at the visitation were family and the closest friends of the family.  I failed to recognize many of them.

The folks who live in the D.C. area worked for the IRS, DHS, DoJ, Census Bureau and DoD.  Most of them worked in IT and most of them were "contractors".

I overheard them chuckling.  Another batch of new bosses blew in.  The new bosses looked at the mainframes and COBOL programming and announced "This will never do!"

So the US Government will continue to sail along on ancient but proven technology buried deep beneath the ground.  Think of it as being like ancient plumbing.  And like old plumbing, anybody with two brain cells to rub together is loath to start working on it because the pipes crumble beneath your tools and once started, you have no control over how deeply you must demo before you get solid pipe to latch onto.