The lighting dynamics of a small office with a view


Mrs ERJ and I had an opportunity to visit with a professional in her new office.

The profession could have been a doctor, financial advisor, attorney; somebody who advises either one or small groups of people.

The professional chose to put her desk diagonally across from the entry door.  She had a three-person couch immediately to the left of the door and a two-person couch across the room from her desk.

The most notable feature, as a visitor, was the window.  It started at about 36" and continued to the ceiling and spanned the entire width of the back wall.

Sitting in the three-person couch, this is what I saw 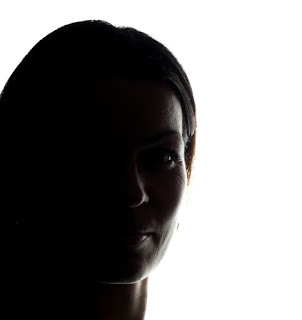 That may be great for interrogations but doesn't work for professional relationships.  60% of the client seating in her office was not going to work.

And before you ask, the sun was not shining in the window.  It was 10:30 in the morning and the office was on the west side of the complex.

Color palette
A minor contributor to the issue was the color palette. 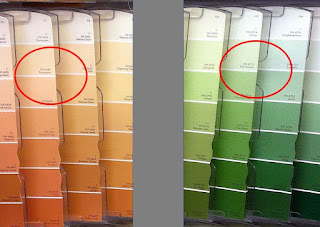 The color intensity was mid-tone rather than pastel.  I think the professional was trying to avoid the sterile, industrial feel that pastels can bring to a room's environment. 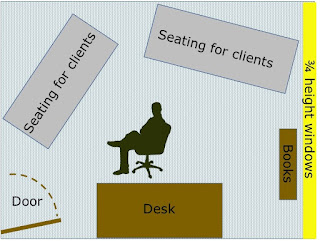 From a communication standpoint, the arrangement shown in the picture would work better than the current arrangement.  The book-shelf could be moved to soften the back-lighting as seen from the two-person couch.

Unfortunately, the professional shot herself in the foot when she bought the furniture.  She would have had far more options if both couches were two-person couches as the 7' long couch really limits the space.

A cheap way to have identified the issue of limited options would have been to cut some Post-it notes to scale and shuffle them around on a to-scale office plan.