One of the things I attempt to do in this blog is to not sugar-coat my screw-ups.

I was tempted to not write this post.  There are not many people who can break a Toyota Camry but appears that I am one of the select few. 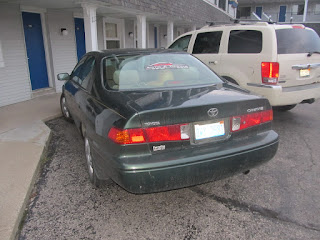 This is the loaner car that Anytime Auto & Towing gave us.  It is Brett's personal car!

At 6:00 PM on Monday we got into the Camry to drive back to the hotel and it would not start.  We got a jump and it would still not start.  Mrs ERJ encouraged me to leave it parked and deal with it in the morning.

Tuesday morning Mrs ERJ and Belladonna went back to Mackinac Island to ride horses and I stayed on the mainland to sort out the automotive issues.

Brett was NOT happy that I had broken his personal vehicle but he stayed calm.  He asked what I had seen and heard.  Then he asked me to pop the hood and check the serpentine belt.  Sure enough, the belt had broken.

He was a distressed because he thought I might have overheated the engine.  I looked more closely and deduced that Toyota engineers had the wisdom to use a separate belt to run the water pump.  Brett was relieved to hear that.

That thing about the sugar-coating works both ways.  Brett was deeply embarrassed that the car he had loaned me (at no cost) had broken a belt.  That is something he feels he should have caught.

Brett drove 25 miles to fix the loaner car AND he brought our fixed van.  It took him about fifteen minutes to replace the belt because he likes to talk.

There was no charge for a service call even though it meant an hour of road time for Brett and the Camry had broken on my watch.

There were no additional charges for delivering our now-functioning minivan to Mackinaw City.

I don't know how they can stay in business when they give away so much service.

His biggest stress involves people who don't bother to shop around and are stunned when they discover it costs money to fix their problems.

He told me of one towing customer who got their mud-bogger stuck 400 feet into the swamp.  It took ATA&T's wrecker the entire afternooon to un-stuck them.  It also involved somebody wading out into the swamp multiple times to re-hook.  They slagged Anytime Auto & Towing when they objected to the $400 bill.  The thing about four-wheel drive is that when you get stuck, you get REALLY stuck.  Anybody else would have charged $600.

Another bad review involved a customer who brought in a custom boat trailer.  The bearings on the four wheels were completely shot (saltwater, I am guessing) and were a non-standard size.  ATA&T had to special order the bearings.  The customer hammered them in the review because it took them a week to fix his trailer and cost him more than his neighbor whose trailer only has two wheels and used standard bearings to boot.

Brett said that the rational thing to do would be to refuse to quote work that is likely to produce bad reviews.  So far they are fighting it.  One suggestion that he threw out in an off-hand kind of way was to insist that the customer get two other quotes before ATA&T made theirs.  That gives the customer a frame-of-reference, a reality check if you will.

Managing employees
Brett is a young guy and is a quick learner.

One of his struggles is integrating empathy for employees with the economic necessity of getting quality work out the door.

This is one of the things I have a little bit of experience about and I was able to offer a suggestion.

It is fairly common for a mechanic to "milk" a job that will be done just before lunch or near quitting time.  Suppose the mechanic could finish up forty minutes before lunch.  If he drags his feet just a little bit, then he finishes just before lunch and can use the "test drive" to pick up lunch "on the clock".

A reasonable management countermeasure is to save a bunch of 20-to-30 minute, simple jobs (like oil change, rotate tires etc.) and suggest that the mechanic squeeze them in before the "test drive".  That way the shop owner fills the mechanic's time with billable work that would otherwise be lost.
Posted by Eaton Rapids Joe at 8:48 PM