Michigan's vaccination status makes almost no sense at all when looked at on a county-by-county basis. 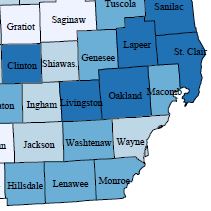 Oakland County is the wealthiest county in Michigan and accounts for about 1/6th of the state's economic activity.  It has the highest rate of vaccination waivers.

Livingston County is next door to Oakland County and is "suburban" in nature.  It also has a high rate of waivers.

Washtenaw County is home of University of Michigan and its medical school and it is in the second highest tier of waivers.

One possible reason for cities performing well is that their health departments receive block grants and can administer vaccinations at no cost to the residents while those of us in wealthier areas must pay out of pocket.  That is not a trivial expense when a single dose of HPV vaccination costs $700 and it is a three shot series.

Another, more sinister possibility is that some areas may be more scrupulous about demanding waivers when a non-vaccinated student shows up.  Other districts/schools may be more "forgiving" and accept the student on the parent's promise that they will vaccinate the child some time in the future.

I must point out that there are monetary incentives to be "forgiving" since Michigan funds schools on a per-nose basis.  No nose, no $7600.

If there are "forgiving" schools and school districts then it is possible that Michigan has clusters of students where more than 20% of them are not vaccinated.

Two thoughts come to mind to ferret out the possibility of "forgiving" administrations.  One would be to perform random audits, after all, we inspect what is important.  The second alternative is to mandate that student transfers within the state of Michigan bring their waivers with them to their new school.  Any significant number of transfers showing up sans waivers and vaccinations suggests systemic non-compliance.
Posted by Eaton Rapids Joe at 6:39 AM