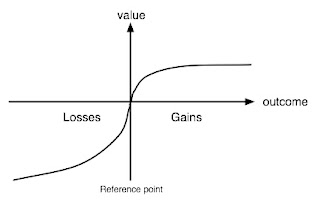 One of the benefits of travel is that you get to meet the kinds of people you generally only hear about.

I was listening to a discussion where the Liberal (with a Capital "L") was explaining why the government was the problem.

The Liberal's premise was totally nonsensical to me.  How could any Liberal be against the government?  In the case of the Liberal who was speaking, the government provided the vast majority of their paycheck, even though much of it passed through other entities like coffee beans through an Asian palm civet before being dispersed.

In fact, the Liberal's point was that "Government is the enemy because the amounts dispersed are not keeping up with inflation."

In this case the Liberal's "Reference Point" on the prospect theory chart was one that moved with inflation.  The Liberal felt pain when the government "failed" and the outcome was below their reference point.

Their point was "I felt pain.  The immediate actor who caused my pain is a problem."  It comes as no surprise that the Liberal's universe was binary:  Victims and Exploiters.

I was tempted to agree with the Liberal and propose that we fix the problem by simply getting rid of the government but I had promised Mrs ERJ that I would behave.