Grape vines as a Landscaping for Wildlife plant

I had a question come in via email:

I am leery of Vitis riparia grapes. I had considered them at one time but then found they spread and are hard on trees. Correct?


I cannot speak to the particular environment that the questioner lives in, but I can speak to what occurs in Ingham and Eaton Counties, Michigan.

There are two times when you will see trees "Swamped" by grape vines. 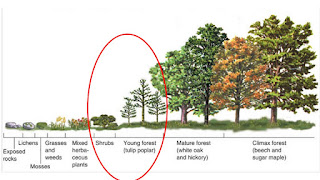 Fundamental to understanding how grape vines fit into the overall, forest ecology is understand that grapes are an early succession, pioneer, woody, "edge" species.

Pioneer species are typically fast growing, sun and fertility demanding and intolerant of competition.  Pioneer species usually have a "gimmick" for spreading seeds.  The seeds are usually wind-blown (willow, birch, populars, elms and maple) or encased in berries that are attractive to birds (mulberries, crabapples, wild cherries, grapes).

Competition in the nascent forest is brutal, a matter of the quick and the dead.  Sometimes the grape vine is the quick and some other, slower growing shrub/tree is the dead.  That explains the first class of "Swamped" trees.

Reversal of causality
Here is an example population explosion caused by release from competition caught in mid-stride:


In Ingham and Eaton counties, grapes seem to have an affinity for P. serotina.  Perhaps it is because they come out of the starting gate at the same time.


Other vines, notably Virginia Creeper and Poison Ivy can climb smooth trunks by virtue of their aerial roots.  Grapes used tendrils to climb and need twigs or thin (less than 1.25" diameter) to grip.  Grapes need young saplings with low branches to make their way up in the world.

It is a near impossibility that the vine grew 40 feet, straight up in the air to reach the first maple branch.  More likely, it was growing on another, shorter lived tree like a black cherry and this vine is a legacy vine.

Other considerations
Most wild grape vines are either male or female.  Male vines are significantly more vigorous and offer less in the way of landscaping for wildlife.  If you are concerned about vines swamping trees then the landscaper should choose females OR domesticated selections that are nearly always hermaphrodites. 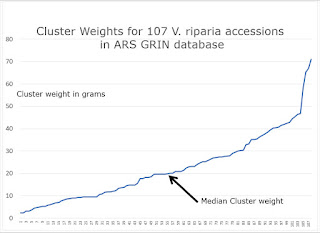 Vine vigor, in the functional sense, is inversely related to cluster size.  Vines with larger clusters will have less vegetative vigor.

The median cluster weight for V. riparia of accessions in the ARS collection is about 20 grams.  Choosing female selections with cluster weights above 25 grams ensures that the vigor of your vines will be manageable.  Examples would be: PI255189, PI588562, PI588259, PI588347, PI588261 or you can simply survey the local talent and take cuttings from the vines with the largest clusters.

By comparison, the ARS lists Valiant as having 135 gram clusters and Frontenac has cluster weights of about 120 grams.  Both of these cultivars are 50% V. riparia.

---Added later:  One other factor worth considering is that wildlife like possum, raccoons, squirrels, even black bears will climb trees and rake vines with ripe fruit down to them.  It is more economical from an energy standpoint to stand below the vines and pull them to you than to climb above them and reach down.

That can be a major factor in limiting a vine's ability to "Swamp" a host tree.  Clearly, this mechanism only impacts vines that bear fruit and not male vines.
End note---

Based on my small survey, V. aestivalis is more likely to be in the tree canopies than V. riparia.  That may be a fluke due to small numbers or it may be related to disease resistance, perhaps phomopsis.