The general population of the two age cohorts born after Roe-v-Wade favor Democrats over Republicans.  The Millennials have a 16% net lean while Gen X has a 11% net Dem lean.

Approximately 40 million abortions were performed between 1973 and 2000.  Running the math on those 40 million lost voters shows that a minimum of 5.5 million net Democrat voters were not born. 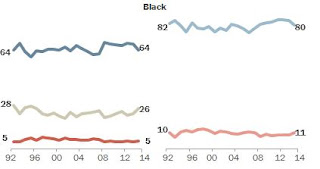 Since Black women are three times more likely to end a pregnancy by abortion than non-Black women, and since Black Gen X and Black Millennials tend to favor Democrats over Republicans by a 69% margin, it makes sense to separate the Black and non-Black populations.

A defensible estimate for the impact of Roe-vs-Wade on Democratic leaning voters is that the subsequent liberalization of abortion laws and aggressive funding of Planned Parenthood killed a net 13 million, "highly likely to vote Democrat" voters between the years of 1973 and 2000.

Is that how political parties commit suicide?
Posted by Eaton Rapids Joe at 9:37 AM