Fame and fortune elude me for yet another day.  I had this plan....

I was going to tickle my sources along Canada's eastern seaboard and ask them to collect seeds from the northernmost sources of Vitis riparia.  After all, that had to be what Leif Ericson must have seen when he named the New Word "Vinland" in about the year 1100.

Then I was going to sell vines of "Leif's Red Wine Grape" and make a ton of money.

The first person I contacted straightened me out.  First of all, passing genetic material across the border is not straightforward.

The other thing is that Leif didn't find grapes.  He would not recognize a grape if it bit him in the anatomy.

According to Rhodora, the JOURNAL OF THE NEW ENGLAND BOTANICAL CLUB (February 1910 issue)

The portions of the original Icelandic texts, which have brought the Grape so prominently into the discussion of Wineland the Good, are frequent statements that the Norsemen found the "vinber," which grew "wherever there was hilly ground" and which, according to one version of the story, were so abundant "that their after-boat was filled with 'vinberjum'... .and when spring came, they made their ship ready, and sailed away; and from its products Leif gave the land a name, and called it Wineland." "Vinber," literally wine-berry, has very naturally been accepted by students of the sagas as "Grape


The berry most commonly associated with hilly ground in that part of the world is the lowbush blueberry.

The resulting fire either kills the taller competition or it "burns off the protein" (nitrogen) that more vigorous plants require.  It also thins out the blueberry canopy and frees up potassium.

So, if you want to taste something like Leif's Red Wine your best bet is to purchase one of the blueberry enhanced beers like Anheuser-Busch's Wild Blue. 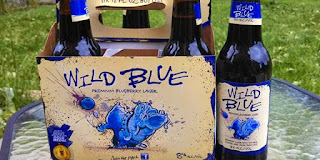