Most of these towns were built up before automobiles became ubiquitous.  Consequently, parking can be tight.

The advantage of backing in is that the person parking is fully in view of the drivers behind them when they start the maneuver and are not as likely to get whacked.  Then, when leaving the parking place they have better visibility and disrupt the traffic much less than if they had to back out and then reverse direction. 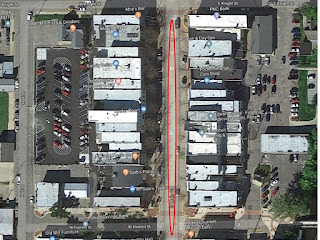 I think the north end of Eaton Rapids' Main Street would benefit from this kind of  parking.  It has a center turn lane but there are no drives to turn into in the north block of downtown.

Parking is more restricted on the east side of the road and so that is where I would propose the reverse-diagonal parking if there is not enough room to put it on both sides of the road after eliminating the center turn lane.
By my count it would take the number of slots from 14 to 21 and they would be prime, quick in-and-out parking places for shoppers.

I happen to know that the mayor of Eaton Rapids is a data driven guy who does his homework.  My guess is that he would call the mayor of Fremont and ask him if the funky parking slots actually get used.  The satellite imagery suggests that people might like the standard, parallel parking better since there are four cars parked on the north side and none on the south...although that may be due to the nature of the businesses on each side of the street.

Then he would poll the business owners along Main Street to determine the level of support for increased parking along the street.

Then he would contact the Michigan Department of Transportation and determine if they would allow the elimination of the center turn lane and the reverse-diagonal parking.  MDOT gets a say because Main Street is also M-99 and M-50.
Posted by Eaton Rapids Joe at 7:46 PM