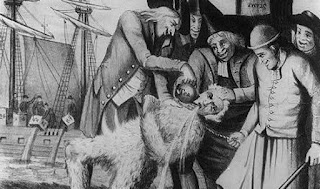 I worked one summer of my misspent youth on a roofing crew. We roofed flat roofs with tar and stone.

The "kettle-man" ran the kettle. He broke up 100 pound plugs of tar with an ax and tossed them into the propane fired kettle.

It was pumped to the roof and "hot" guys carried it in buckets to the skilled guys who poured and mopped it. Gravel was added later.

One morning we lost our kettle-man. He always started early...four in the morning if memory serves...because the crew had a temperature window to work with. The tar had to be hot and liquid when we showed up.

Because he started early he also punched out early and a kettle that is 1/4 comes to heat more quickly than one that is full. So a big part of his job, early in the shift is to refill the kettle, never adding so much that it dropped the temperature below the working temperature of 450F.

Unlike ice which expands when it freezes, tar shrinks. It shrinks a lot. So every plug of tar had a deep cavity in the top.

One night it rained. In the morning, the kettle-man did as he always did. At some point, when the kettle was almost full, he tossed in a piece of tar from the top of one of the plugs. It still had some water in the cavity....perhaps the recess in the top had partially "bubbled". I don't know. I never saw the kettle-man again to ask.

The water flashed to steam and sprayed the kettle-man with molten, 450 degree liquid tar which immediately congealed upon hitting his skin. The kettle-man was a big man. It was hot near the kettle. He was not wearing a shirt (but he was wearing sunglasses).

The Emergency Room physicians resorted to using a hand-cleanser, GoJo, to soften and remove the tar. A eighth-of-an-inch of slagged on tar burned equally deeply into his flesh.

Everywhere he was splashed, except for the spider webs, were third (and fourth) degree burns.

Modern medicine is a miracle. It can save nearly every person who has less than 40% of their skin covered with third degree burns. The first hospital stay is long, 20-to-40 days. The treatment is excruciating as the patient is put into a whirlpool for "debridement". Debridement is when the dead and infected flesh is removed by the water and mechanical scouring.

In the absence of modern antibiotics, sterile whirlpools and an economy rich enough to subsidize putting a person into intensive care for a month....burn patients with 40% of their body surface covered with 3rd degree burns are going to die a very, very painful and protracted death. Many will opt for suicide.

The lucky ones are the ones who die quickly. They will be unable to replace fluids or their electrolytes will get out-of-balance and they will tag-out with a heart attack. They will die within days. Still excruciating pain, but only days of it.

The unlucky ones will linger for weeks, and then die.

Back-in-the-day, to be tarred-and-feathered was not a joke and almost inevitably fatal.

If you survived (unlikely), you would have horrible scars and everybody would know, "You were the guy..."

Today, the term "tar-and-feather' is something of a joke, a meme or shorthand for taking action against somebody who you disapprove of.

It is not a joke. It is a death sentence.

And it is telling that at various times in our country's history people felt it was not just justified, but required.

Posted by Eaton Rapids Joe at 2:41 AM