Mrs ERJ gave me a project before she flew to a far-off state to be an angel of mercy. She picked out a ceiling fan for me to install in our living room.

Those of you who are blessed (or cursed, it is a matter of perspective) to know an engineer, you know it is impossible for us to look at a product and not think "I could make that better.

In the case of the ceiling fan, I think it is warranted.

The airflow is underwhelming.

A simple, back-of-napkin analysis suggests that the blades of the fan are too close to the ceiling to effectively "grab" air. 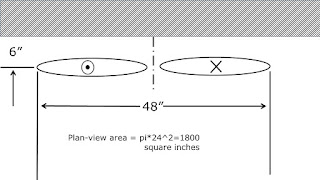 There is half as much area between the tips of the blades and the ceiling as there is in the swept area of the blades...or close enough for government work.

Fluids don't like to turn sharp corners. The airflow would benefit if I could raise the ceiling by six inches or so.

Or I could lower the fan blades by six inches.

Or I could lower the tips of the fan blades by six inches.

Or I could lower the tips of the fan blades by anything, even if it is less than six inches. 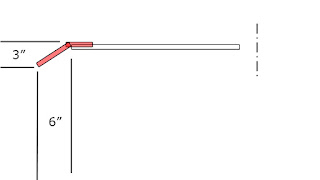 The pink bits are extensions that can be added to the ends of the blades as a trial to verify the physics of raising the ceiling....or whatever. Back-of-envelope calcs suggest I might get 50% more airflow.

And Mrs ERJ thought this project would keep me out of trouble. Bwa-ha-ha-ha-ha-ha...