Back to the normal workday

Not many pictures today.

I went to the hunting lease and closed up the shooting ports with poultry netting. Every fall I get to sweep raccoon poop out of the blind. It is about time I did something to stop that.

Going up on a ladder and inspecting the blind from the outside shows it is very much in need of a major refurb. I will add it to the list.

While working on the blind I saw a Bald Eagle. That makes three, maybe four in one week. I saw two on Island Highway, east of Charlotte yesterday. I saw one fly overhead today and then minutes later the same, or another WAY UP HIGH. If it was the same bird he/she grabbed one hell of a thermal.

After buttoning up the blind, I went out into the woods and started planting acorns and northern pecans where the ash and elm have been dying off.

The forest composition at the hunting lease does not meet with my approval. Way too much "soft maple", aka Silver Maple. Too much dying ash and American Elm. On the positive side, there is a decent amount of Black Walnut, some Swamp White Oak and a bit of Shagbark Hickory.

Some would look at the dying ash and elm as a tragedy. I see it as an opportunity. They will come back but at a much lower level than they were. This is a chance to inject some mast producing trees that are fast growers and heavy producers of mast.

The acorns are ones I purchased from an eBay seller near Zanesville, Ohio. They were advertised as Northern Red Oak and they are very, very large. Large acorns work well for direct seeding because they have enough resources to punch a root deeply into the soil and perhaps even put out two flushes of growth.

Choosing seed sources from locations 200 miles south of me increases the chances of three flushes of growth in a growing season vs. two flushes. A difference of two hundred miles might be a big deal for species where I am right on the raggedy edge of where they can survive, but Northern Red Oak happily grows in Michigan's Upper Peninsula, Wisconsin and Minnesota so it has lots of site plasticity.

Likewise, the pecans were from southern Indiana, western Kentucky (thanks Lucky!) and Pawnee pecans from (cough, cough, Texas). The Pawnee are "lottery tickets". Pawnee nuts would be plenty hardy enough if pollinated with northern pecan pollen like Kanza or Missouri wild pecans. God only knows what they were pollinated by in Texas. Lottery tickets.

I planted for about two hours and I was whipped. I planted three to a hole. If a spade leaves an 8" gash in the ground, then the three nuts/acorns were space 4" apart.

I planted deep to deter the squirrels. Between the nuts already splitting and the acorns throwing roots, the rapidly warming weather and the number of squirrels reduced by the winter....some of them might survive. 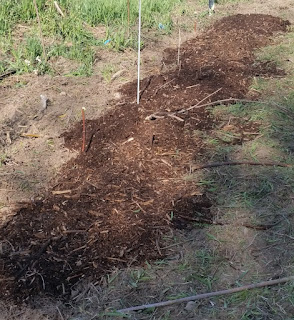 Of course I had more nuts/acorns than energy to plant in the woods fighting with the roots and all. I tilled up an area near the road and raked out the nuts. Then I covered with composted woodchips. "Composted woodchips" sounds really ambitious. It was a pile of woodchips that I successfully ignored for several years and was the closest source of material I could use as mulch. Now you know.

The third flight of Mrs ERJ's SSS peas went into the ground today. 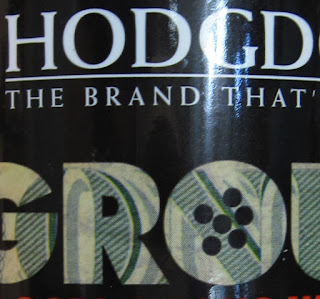 Mrs ERJ enjoys sewing. She doesn't engage in major projects but she gets a great deal of satisfaction in repairing the wear-and-tear that clothing experiences and being able to return it to service rather than sending it to a land-fill and buying new.

So I was very happy to find this product that is particularly useful in the creation of button-holes, especially for buttons around 3/8" in diameter. I found it at BGS in Hastings, Michigan.

This site Page One, Page Two, discusses terminal ballistics of commonly available bullets for the 35 Remington.

One observation by the author (paraphrased) that really caught my attention was "A modern, jacketed bullet has no terminal ballistic advantage over a cast, gas-checked bullet (12 BHN) when both bullets are launched at 2000 fps." For the record, common wheel-weights cast and air-cooled are usually about 12 BHN.

This has me thinking about gas-checking 158 grain cast bullets for the .350 Legend.

The price advantage goes to the Axis by a wide margin.

The Ruger's ability to accept AR  style magazines is a distinct advantage. They are cheaper than proprietary magazines and rock-solid, robust in the field.

If you opt for the Savage with the 90 degree bolt lift then you should strongly consider a simple, 4X32mm, fixed-power scope. The slimmer profile of the scope makes a quick second and third shot far easier to accomplish.

Honestly, with a .350 Legend you are not going to be attempting 300 yard shots and 4X should be plenty of magnification. A very-good 4X32mm scope is much cheaper than a junk 3x9-40mm scope.

The only thing that will prevent you from filling your freezer is a shortage of deer/hogs or a lack of woodscraft on your part.