Figuring out how to move the 600 pounds of grain from Eaton Rapids to Fabulous Acres proved to be a much tougher problem than the Aiello brothers anticipated.

Lansing, like many cities, was surrounded by a ring of limited access “Interstates”. In the case of Lansing, the outer ring was almost square and measured 10 miles on a side.

The Acting Governor had roadblocks set-up on every road that went over or under the Interstates. He was deadly serious about stopping any food “smuggled” into Lansing that he was unable to “tax”.

The obvious solution was to get some trusted residents from Fabulous Acres jobs at the road blocks.

“No way, Chico” the head guard laughed in their faces. “You have to know somebody to get one of these jobs.”

Few jobs have more opportunity for graft, corruption, bribes and the petty exercise of power than to be a Customs Agent. And the most desired positions of all were the ones on midnight shift.

Victor and Hermes discussed the possibility of slipping over the Interstate in the dark-of-night but further intelligence gathering indicated that the roads were patrolled by various types of vehicles. The guards were armed and had no inhibitions about shooting at shadows.

Maybe one or two people could manage to slip over the Interstate but the neighborhood needed a dozen men to carry the six-hundred pounds and it needed to happen every night.

Rodney had a 14 foot long jon-boat that was painted in dark, smudged colors to resemble marshy vegetation. He also had an electric motor and a deep-cycle battery.

The battery was brought to full charge by running a vehicle and tapping into its battery.

In the dark-of-night, the boat was transported beneath a tarp and launched in the Grand River at the end of Jolly Road. From there Antonio, a slightly-built 17 year-old rowed the boat up-river. Luckily, the river had almost no current as it was dammed a couple of miles downstream.

After two miles of rowing, he passed beneath the Interstate and another two-hundred yards placed him behind the Dimondale United Methodist Church.

Six-hundred pounds of corn in fifty-pound sacks were loaded into the bottom of the boat.

The young man needed help pushing off. The combined weight of the corn, the young man and the battery put the boat almost 300 pounds over its weight limit.

The bags of corn were perfect ballast, the water was still and the motor low power. Antonio’s biggest risk would be if he plowed into a sandbar he could not push the boat off of or if he hit a partially submerged log. If he didn’t hit the log square, there was a slight chance he could roll the boat.

Antonio motored back downstream, keeping his speed low enough that there were no sounds of the water being pushed by the bow.

He didn’t go to Jolly Road but stopped a mile short where power-lines crossed the river. Fifteen men were waiting at the outside of the bend. The bags of corn were quickly removed from the boat and deposited into a grab-bag of pack-baskets and back-boards. The three extra men were for security. It was a six-and-a-half mile walk back to Fabulous Acres.

The young man returned to the sandbar behind the Methodist Church and his brothers, the four-strong-backs on the butchering crew, collected him and the boat. They stashed the boat beneath some forsythia bushes that were just starting to bloom. It was invisible beneath the vivid, yellow flowers looking so much like dried, winter weeds. The men put the motor, battery and oars in the back of the truck they had borrowed.

Back, beneath the power-lines, the fifteen-men took off with two armed guards in the front and one at drag. 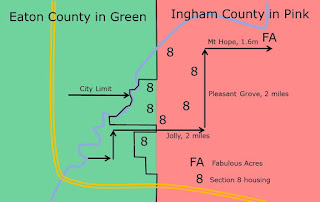 They marched under the powerlines until they hit Williams Road. Then they traveled north until they  hit Jolly Road. As soon as they hit the Lansing city limits they were bracketed by massive, Section 8 Housing Projects. Lansing, in a political power play, had packed the tiny sliver of Eaton County within city limits with subsidized housing to flip the electorate of that county.

The fifteen men moved at a quick walk and they moved almost silently. They continued east on Jolly past Waverly, moving into Ingham County. Both sides of the road were now very urban.

Police drove around in vehicles. With almost no civilian vehicles on the road, it was not difficult to melt into the scenery until they had passed.

They stayed on Jolly for a total of two miles. Then they turned north on Pleasant Grove road for two miles, then east on Mount Hope until it hit Fabulous Acres.

It had been a long day for all parties.