It is my personal belief that a good ceiling fan means you can run the A/C between two and five degrees warmer and still maintain the same comfort level.

We do not have a ceiling fan in our living room. Mrs ERJ gave me a list of projects to keep me out of trouble and one of those projects was to install that fan.

To install the fan, I decided I needed better access to the attic. I currently have a 21" square hole through the ceiling that I must shinny up. The access is in the closet in Kubota's bedroom. It is a chore to empty the closet, hoist myself through the hole (which seems smaller every year), do the task and then reinstall everything in his closet.

I decided that I am old enough to treat myself to a pull-down ladder to the attic.

I have been holding off on drywalling the ceiling until after the new roof. Leaks, don't you know.

We have the new roof.

I started stripping the pressed-paper ceiling tiles out of the kid's bathroom, the better of the two potential locations for the ladder. 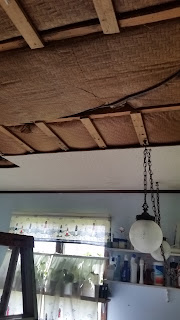 The house was built in the mid-1970s. The tiles had been installed with a staple gun. All I had to do was look at them cross-eyed and they fell off the ceiling.

Cutting the lath the tiles were stapled to was not a big chore.

Then it got ugly.

I cut the fiberglass batting and was rewarded with three bushels of blown-in, cellulose insulation on my face and down my shirt. 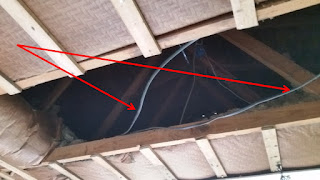 Peeling the insulation back I was rewarded with the sight of electrical wires strung across the opening where I had hoped to install the ladder.

I piddled around for five hours running wire to clear up the mess. One of those hours involved trip(s) to the hardware stores. Then I had to knock-off for the day because I was scheduled to take food to Mom.

An occupational hazard of blogging is that I might imply that I am handier than I really am. A real electrician would have been able to rewire this in less than an hour.

I will give it another whack tomorrow. The directions for installing the ladder say I need two people but I am going to try it by myself. A real carpenter could probably knock it out in an hour so it will consider it a glorious victory if I can knock it out in less than five.