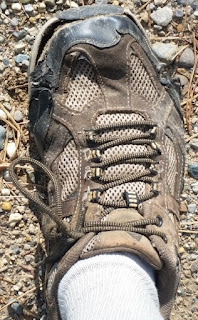 I see evidence that I am not as sharp as I used to be.

I went to the park to run and while I was stretching I noticed I was wearing "garden shoes" rather than running shoes. Battered shoes with blown-out sides and the soles separating from the tops.

It matched my knees and gut. I must not run very hard because the old body is still holding together. The shoes made it 3.5 more miles without issues. 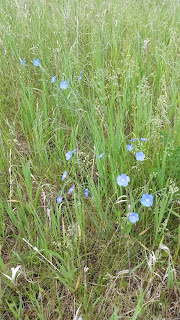 Kubota and I are having old bull-young bull issues.

It all seems pointless from this end. My name is on the deed and his is not. If somebody must move out it will not be me.

I received an email from a friend in southwest Missouri. She had lost all of her apples and pears to frost, again.

There are at least three species of crabapples native to the eastern United States, Malus coronaria, Malus ioensis and Malus angustifolia. All three of them tend to be much later blooming than Malus domestica, the common apple with M. angustifolia being the most reliably late bloomer.

These crabs come with many negative traits. The ones I have personally tasted were spitters...and then spit again to get rid of the remnants of the taste. Astringent and bitter and soapy tasting. The fruit were small and hard. The foliage was riddled with Cedar Apple Rust.

But research suggests that some of these crabs are only sour and not nasty. Sour can be fixed with sugar.

These crabs have some positive traits beyond their late blooming. They tend to be resistant to fireblight. Many of them are resistant to collar rot.

Neils Hansen a breeder in South Dakota used M. ioensis and coronaria in some of this breeding. Because of Mendelian genetics those crosses with M. domestica probably don't have super-late blooming but a sibling cross and plant-out would likely produce some seedlings with that trait.

Mrs ERJ called the company that carries our house insurance to report the new roof and hopefully get lower rates.

The person on the other end of the phone was sympathetic but our rates went up due to assorted reasons. One of those reasons is that insurance companies base coverage on replacement costs and construction materials are getting pricey and you (might) need to pay a premium to get a crew to show up.

I think I have some readers who are in the insurance business. Any comments will be appreciated.

We got a half inch of rain a few days ago. It soaked in quickly.

I got my tomatoes and a couple of short rows of tobacco planted yesterday. My timing was good. It looks like we picked up another half-inch of rain last night.

Yeah, I know what some of you are thinking "Tobacco. That kills people. Why would you grow THAT?"

Tobacco can also be used as an insecticide. Historically, tobacco has been used for money. It is ornamental. Once I have a strain it produces seeds prolifically and I can keep it going by re-grows and keeping in the freezer. If things get dicey then it would be hard to get seeds.

Smoking cannabis influences people much, much longer than the effects of nicotine.

Growing cannabis is likely to attract attention from the wrong kinds of people even where it is legal while tobacco will not get a second glance.

Quality of cannabis is highly dependent on the absence of viable male plants in the area, something that a small-holder cannot control. Tobacco does not care.

Tobacco makes a fair insecticide which could be important if ectoparasites like lice become an issue.

Posted by Eaton Rapids Joe at 7:03 AM