Upgrading the labels in my breaker-box 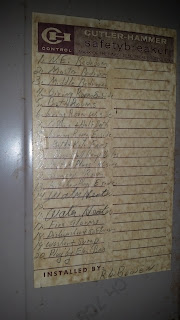 The label on the inside of the breaker-box door was yellowing and the handwriting was never all that great.

I decided to upgrade. It was one of those quick projects I could execute before heading off to Mom's for the day. 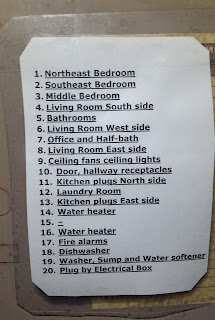 I printed it in 14pt Verdana Bold. Then I laminated it between a couple of clear sheets of sticky plastic.

The door fell off as I was attempting to tape it into place.

No problem. It was easier to work on off-the-junction box.

I reinstalled the door. Went upstairs and noticed that our security camera monitors were dark.

I tried a couple more circuits and found another that was dead.

Trotting back down the stairs, I saw that three of the breakers on the left side of the box had been tripped when I put the cover back on. Easy fix, right? I flipped the three breakers to the "On" position and went back up the stairs sure I had solved the problem.

Still no joy. The monitors were still dark and it was time to go to Mom's to relieve the previous caregiver.

On the way home, I swung by Menards and purchased a couple of breakers in case I had fried them. Unfortunately, I did not have an example with me so I bought two of the more common types.

Once home, I put on my head-light and grabbed my handi-dandy multitester. The lead coming into the left side of the panel read 124V.

The first breaker, one that I knew had tripped read zero. I cycled the breaker and made sure it had cycled on. I also pressed it to make sure the clevis had firmly engaged the tab on the breaker-bar. The last part was just for show as the surface of the breaker was even with the others.

Then I worked my way down the row of breakers on the left side of the box. All DEAD!

I checked a couple on the right side. They read 124V so it was not a case of my multi-tester being dead.

That is when my eyes focused on the actual writing on the faulty breakers.

I had not tripped three breakers when I reinstalled the breaker-box cover, I had tripped seven of them. When I toggled the three I had turned them off.

Fixing the problem involved turning the breakers on the left side of the box from "Off" to "On".

As a last resort, read the directions....or the labels on the part.

Now I need to find some screws to ensure the cover doesn't jump off the box again.

Posted by Eaton Rapids Joe at 6:46 AM