We got a tiny bit of much needed rain.

At two, Belladonna and I went out to the paddock holding the cattle in a nearly vain attempt to feed Millie a bottle of medicated milk replacer.

After about fifteen minutes of attempts to beguile her we stumbled across the winning ticket. SMELL.

On a hunch, I sprayed Millie's bosom companion, Lucy, with some milk replacer.

A light-switch went off in Millie's head. Suddenly, she knew what was in that bottle Belladonna was holding.

Everything was dandy for a bit.

Millie was bolting down the milk replacer and Belladonna was swatting at the other calves (Bill and Brutus) because THEY knew what was in that bottle.

Millie was 3/4 the way through the bottle when she gave a cough, convulsed and then dropped as if hit between the eyes with a ball-peen hammer.

She was barely breathing.

We were sure she had slipped her mortal coil.

Two hours later she was standing and grazing as if nothing had happened.

An acquaintance purchased a Savage Axis package in .350 Legend that included a bottom-shelf scope.

My luck with packages has been abysmal.

This one was no different. Looking through the scope, I saw two sets of reticles, like a tic-tac-toe grid. Nor could I get the background and the reticle to both be in focus.

We took it to the shooting range and neither the kid and the guy behind the counter at Family Shooter Corral saw any problem with the scope.

The guy behind the counter gently suggested that maybe the double reticle issue was due to my eye-glasses. I had never considered the fact that my eye-glasses did not have anti-reflective coatings on them. Oddly, some scopes are fine and others are not. Perhaps it is an issue of the last lens on the scope having an anti-reflective coating on the surface closest to me.

Another issue involves cataracts. Those of us who spend a lot of time outside get pummeled with UV light. Over time, the cumulative effect of that UV light is that it clouds the cornea and lens of our eyes.

Things to think about.

I was whipped today. Maybe it was the cowboy work yesterday.

I did a light run of two miles and it didn't hurt.

Our bodies are dreadful liars. They tell us we are killing them. One of the standard bits of advice handed out to beginning runners it to run for a mile or for ten minutes at a gentle pace, THEN listen to what your body is telling you.

Many times what your brain registers as strain or pain is actually tightness or lactic acid that needs to be flushed. After ten minutes of gentle, rhythmic stretching and movement enhanced blood flow your body will tell you the truth.

In checkout I told the woman working the cash register that I was striking a blow against white supremacy by purchasing whole grain products.

It either went over her head or she did not appreciate my making sport of the issue.

Mrs ERJ gets about 80% of the mail addressed to us. Much of it is from charities hoping for a contribution.

Another big chunk involves bills. I have a couple big bills every month and Mrs ERJ has about ten smaller bills that she covers.

They have just the last few end-caps to put on, joints to caulk, tools to pick-up and their final check-list to finish. Then I get invoiced.

I have been happy with this contractor.

Maybe it is the smallest of things, but when they were stripping off the old roof they had a large crew on the roof. One of the guys must have favored "rap" music. When I was outside talking with the guys they were playing Mexican music (lots of brass, Spanish lyrics).

They asked me if it was OK if they played music. I mentioned that I like the Mexican music much better than the rap.

I did not hear another note of rap-music the rest of the time they were here.

Another thing that I appreciated is that they did not nuke the shrubberies around the house. They dragged the all old roofing over to a corner that didn't have shrubs and dumped them onto a tarp and then carried them to the dumpster on the drive. A pain in the butt to be sure but they didn't give it a second thought.

At least four of my friends sent me links to a video by Kentucky Ballistics involving a .50 BMG firearm that disassembled upon firing and nearly killed the shooter.

Thanks for sending it to me. It is a great way to judge interest in topics.

While not intimately familiar with the firearm in question, I have to wonder how robustly that firearm handles gas from ruptured cases. 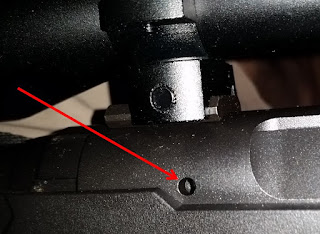 For instance, a Savage Axis has two, 5/32" diameter holes drilled in the sides of the receiver to vent gasses from blown brass away from the shooter and reduce thrust on the bolt in the event of catastrophically high pressures.

I am not saying the firearm in question does not have adequate gas venting. Just pointing out that robust gas venting can go a long way toward preventing the overpressures that can cause catastrophic disassembly of firearms. The brass is the fusible link in the system but if the receiver/bolt has no accommodations for venting gasses....well, the fusible link is for naught.

Another thought is that actions that screw together like the one in question can present difficulties in getting holes in the block and holes in the barrel to align. A small amount of over-torquing the block can cause the holes to not align. Not saying that is what happened, just pointing out that it is a sensitivity of that concept.

Lights on, nobody home

It is rumored that California is set to release more than 65,000 prisoners convicted of violent crimes. 20,000 of them were sentenced to life-in-prison.

And they expect us to wear masks and socially distance and report all of our assets and income, and use everybody's pronoun de jour or...what...they will throw us in prison?

What cop in his right mind is going to make extra work for himself by apprehending crooks when he knows catch-and-release is in effect? More likely he will tip his cap and say, "Have a nice day and keep the body-count of innocents to a minimum, please"

And if he gets a call and finds the corpse of one of those violent criminals in the gutter...how hard do you think he will look for the person who did-the-deed? My guess is that he will not look hard at all.