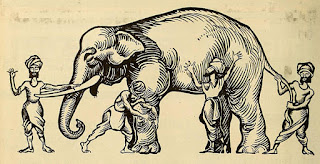 It is a word like "ginger", "pelosi", "hater", "snowflake" and "redneck". In fact, if you look closely, "ginger" uses the same letters as "nigger", just slightly rearranged.

An effective communicator is able to anticipate all of his listener's reactions and adjust his message until the expected reactions match his intentions.

It is doubly damning that every listener will be absolutely sure that their interpretation is the ONLY valid interpretation. It is a four-blind-men-and-an-elephant word.

"nigger" is a flashpoint because of its association with dominance.

It cuts both ways.

For every White and Asian person who uses the word "nigger" there are twenty Black people who use it. When a Black person uses it in front of a White person, the Black is perceived as rubbing the White person's nose in the fact that Whites must submit to Black feelings but Blacks don't.

Even Blacks sense the aggression of being called "nigger" by other Blacks. It is a way of telling the listener that they are of so little consequence the speaker does not deign to remember their name.

As an aside, rap-artists are the group that most visibly uses the word "nigger" for dominance and they also have an extremely short life-expectancy. Coincidence?

Historically, Blacks were made submissive to Whites, by violence if necessary. The word "nigger", when used by a White person, triggers those memories.

That makes "nigger" an incendiary word. Like matches and bottles of kerosene, those kinds of words have their narrow utility. However, walking around with a Molotov Cocktail identifies you as an enemy combatant to somebody (and a hero to others). Using the word "nigger" in mixed company has the same effect.

While I have a strong preference to not use the word "nigger" and do not allow it in comments, I don't think people should lose their jobs if they uttered it at some point in the past. Certainly, it pales in comparison to pedophilia, graft, treason and murder.

Using the word "nigger" or flying the "Confederate flag" send messages that are interpreted differently by different people. The message it sends to me is that you are an ineffective communicator or, in the case of the flag, you refuse to blindly submit to authority.

Your mileage will DEFINITELY vary.

Posted by Eaton Rapids Joe at 7:51 AM