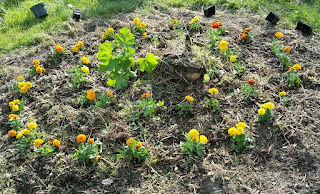 I am seriously rethinking my dislike for this plant.

One of my goals is to encourage parasitoid and parasitic wasps during the mid-May to Mid-June time period. That time period is the peak time for Plum Curculio, a difficult pest to control even with chemical methods. Plum Curculio attacks apples, pears, plums, peach, nectarines and other tree fruits.

Researchers have been finding that native species will "shift" to match up to abundant food sources. Suppose, for example, the Emerald Ash Borer is vulnerable to parasitoid wasps 300 Growing Degree Days earlier than a locally abundant parasitoid wasp species. The earliest individuals of parasitoid wasps will have reproductive success and over the course of a decade the peak period for that local parasitoid wasp will shift to match up with the EAB.

This is where the skeptic observes "OK, so if parasitoid wasps currently knock out 0.5% of the Plum Curculio...then knocking out three times as many means there are still 98.5% to lay eggs on your apples."

That is true for the first generation. If I can identify prime nectar sources for parasitoid wasps and can amp-up their reproductive success...then over several generations I might be able to foster local strains of parasitoid wasps that hammer Plum Curculio. Many issues in practical biology are compound-interest problems. Consider how quickly the population of predators could rise by changing the "curve" from P*1.0^t to P*3.0^t

To date, I identified Horseradish and Rugosa Rose as prime nectar sources for a very wide range of wasp species. Horseradish is early and Rugosa Rose covers the later part of the season. Both of these plants have relatively long flowering seasons. Another species that appeals to an enormous range of nectar drinkers is rhubarb. The problem with rhubarb is that they put out for nectar for days instead of for weeks like the other two plants.

Now I am looking at Ground Ivy. It seems to favor larger nectar feeding "bees" but I will be watching it closely. One beautiful thing about Ground Ivy is that it has a very extended season. It starts much earlier than Horseradish and might continue long enough to bridge the gap between Horseradish and Rugosa Rose. I may have to put out some fly-paper traps to see what is visiting the Ground Ivy.

For those that live in an area where letting creeping Charlie grow is not a problem for neighbors, creeping Charlie can serve as a nectar source. Creeping Charlie employs a unique strategy to attract some bee visitors, such as sweat bees, bumble bees, and honey bees, that is tied into how the flower produces nectar. The flowers have a unique strategy for rewarding visitor pollinators, commonly referred to as the “lucky hit” strategy. Creeping Charlie flowers produce an average of 0.3 microliters of nectar per flower, but the amount of nectar in any one flower varies greatly, ranging from 0.06 to 2.4 microliters. When 805 creeping Charlie flowers were sampled for nectar quantity, it was found that only 8% (64/805) of these flowers had a large volume of nectar, and the rest had almost none (Southwick et al. 1981). The availability of nectar also varies throughout the day. As the morning fades into afternoon, “lucky hits” become less frequent, as creeping Charlie flowers do not replenish their nectar throughout the day. Most flowers produce their nectar at night or in the early morning, so it is believed that all the “lucky hits” available in the afternoon are ones that were missed by bees earlier in the day. One researcher (Southwick et al. 1981) found that bees foraging on creeping Charlie for 5.9 minutes obtained enough nectar from the flowers to make foraging on creeping Charlie energetically profitable.     -Source

I noticed a bird getting trapped in the breeze-way yesterday. It had a long, slender beak so it was not a typical sparrow. I must admit to being weak on identifying little, brown birds. 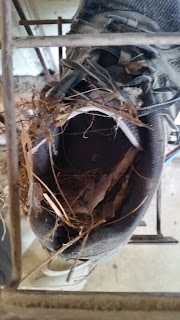 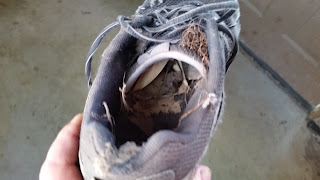 I think the bird was attempting to build a nest in my shoes.