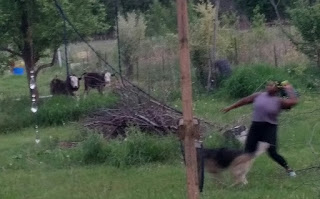 Technically, this is a horrible picture. It is all blurry, dark and out of focus. Too much clutter from the burn pile, the swing-set leg and the sun catcher.

Bella is throwing the ball for Herc, the senior German Shepherd. Herc is beside Bella and spinning around as he anticipates the direction she is throwing it.

Two calves are watching. Bella fed them a bottle once and they were probably hoping for more. But it looks like they want to play, too.

Yes, Bella is a lefty. But she is employed, is a great cook (venison stroganoff for dinner tonight!), hunts, fishes, is tidy, loves babies, looks like a girl and is single.

Our 140 square feet of rug has been vacuumed. The wooden floors mopped. Five loads of laundry chased through the system.

The thing about dirt is that it is like trying to stack oily ball-bearings. They refuse to stay in one place.

I will give it another good whack tomorrow morning and then I have Mom detail for the rest of Friday and all of Saturday. I should be able to beat Mrs ERJ back home by an hour which will give me time to vacuum again.

I used to think winter squash were a "F___ it, I'm done" crop. You planted most of your garden and then when you were exhausted you planted what was left with winter squash.

There is some merit to the approach. Squash and other vining crops demand very warm soil for the seeds to germinate. They can be very happy if planted June 10 even at these latitudes.

A single Hubbard squash seed can cover an amazing amount of square feet if planted in fertile soil. It takes very little effort to plant four hundred square feet of squash. They gobble up the ground quickly.

Throw turnip or daikon seed into the canopy in mid-July and you have lots of food for relatively little effort.

I am planting seven varieties of winter squash this year. It is a trial to see what appeals to Mrs ERJ.

Most squash fall into three separate species. C. pepo, C. maxima and C. moschata. They do not cross pollinate so you can easily save seeds from three selections of winter squash if you choose one from each species.

Most pumpkins, zucchini, acorn, delicata and spaghetti squash are C. pepo. This year I am growing Winter Luxury (pumpkin) and Jester C. pepo. Jester is a hybrid so it would not come exactly true-to-type.

I am growing Buttercup, Golden Hubbard and Red October C. maxima. The Red October seed is old and might not germinate. In general I like the taste and texture of C. maxima best but I grew up on Hubbard squash for Thanksgiving so it may be an artifact of early imprinting.

Some people contend that C. moschata are inherently more pest and disease resistant than C. pepo and C. maxima. I planted seeds from a store-bought butternut squash we ate and I thought had adequate quality and a hybrid named Autumn Frost. The store-bought squash could be either open-pollinated or hybrid. There is no way to know for sure.

Some people get the heebie-jeebies about planting seeds saved from hybrid plants. I suppose that if I was space constrained I would be too. I could not afford the risk of planting seeds that produced huge squash or tiny squash, sprawling vines or tidy bush vines. But regardless of the details, the fruit is very likely to be edible.

So even though I have multiples of pepo, maxima and moschata in my garden, I have no qualms about saving seed even if some of it crossed with another p-m-or m. It is all good.

As a side note: Mrs ERJ will be getting a yellow zucchini in her salad garden. She likes zucchini and I like her. The failure mode for zucchini (called 'mallow' in Britain) is to miss picking them when they are small.  Blink your eyes and they are the size of blimps and the vine shuts down production. Zucchini that are bright yellow are easier to see, easier to pick.