Darwin knew he didn’t have a lot of time to work with Jarrell so he boiled it down to the bare-bones, as he saw it. * 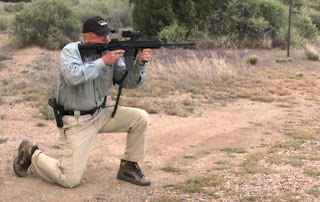 Dar had Jarrell do all of his shooting in the kneeling position. Easy to drop into. Easy to pop out of. Twice as hard for the bad-guy to hit you with return fire.

Dar had loaded up inert rounds. He had spray-painted them white to make them easy to keep track of.

Dar stacked cardboard boxes and made a “course” for Jarrell to shoot. Dar instructed Jarrell to keep firing at the closest target until it fell over, then engage the next closest. Dar had strings tied to the stacked boxes and could make them fall by yanking on the string.

Jarrell wanted to know why he was practicing with a pump-action shotgun. He knew Dar had several semi-autos.

“Another thing is that the transition from pump to semi-auto is easy. It is not as easy the other way around.”

Each time through the course Dar layered in a little bit more complexity.

The first time he had Jarrell move forward through the course.

The next time he had Jarrell do a fighting retreat.

Then he had Jarrell herding a beach-ball backwards with his feet while doing a fighting retreat.

“Why do you have me doing this?” Jarrell asked.

“Suppose you are at Applesauce Steakhouse when the balloon goes up” Dar suggested. “You are retreating to your vehicle with your family so you can exit the area where the flash-mob is. What do you think your three-year-old daughter will be doing? She will be glued to your legs. Get used to it.”

All with inert rounds.

“That is going to be to your advantage” Dar said. “From now on, I want you pulling the weapon back into your shoulder with your trigger hand and pushing forward with the hand you have on the slide.”

“Won’t that slow me down?” Jarrell asked.

“It will with the inert rounds” Dar admitted. “But it will speed it up with live rounds. You can cycle the pump gun as quickly as a semi-automatic when you have recoil because the recoil will stroke the weapon back and your forward pressure will cycle the slide forward.”

“The other thing is that it will mitigate recoil” Dar said. “Pulling back with your trigger hand and pushing forward with your slide hand puts tension in your muscles and takes the slack out of your joints. Makes a HUGE difference in felt recoil.”

The last round through with the inert rounds had one target that would not go down. Jarrell ran his weapon dry. Then he laid it down.

“I don’t get it” Jarrell said.

“You are doing good with your high, center-of-gravity shots” Dar admitted. “But what happens when you run into somebody with body armor?”

Jarrell loaded one inert round and raised his point of aim. At the click of the firing pin, Dar yanked the string and toppled the stack of boxes.

“If you dump two rounds of double-ought into a target and don’t see an effect, change your point of aim. Shoot for his head, groin or thigh” Dar advised.

Dar finished the training session with two passes through the course with live rounds. Jarrell ran it without the beachball for safety reasons. There were no surprises, just reasonably fast times with workman-like accuracy.

Jarrell was inordinately proud of the feedback. He had a sense that Dar did not hand out un-earned praise. And he was right.

Jarrell's self-esteem went through the roof when they got back home and Dar gruffly told him "Take the damned gun with you. It won't keep Melody safe sitting in my safe."

Jarrell felt the unalloyed joy of a 12 year-old, walking back to the garden shed with the 12 gauge pump shotgun in one hand, box of 00 high-brass shells in the other.

Next to Sundays, Wednesday’s were her busiest days and she needed a little pick-me-up before rejoining the party downstairs.

Dr. (of Divinity and Sacred Writings) Gracie Sherman was an enormous woman and had appetites to match. Massing out at 400 pounds, less a double-handful, she carried her avoirdupois with more grace than seemed possible. Lycra was her best friend.

She had taken the storefront Tabernacle of Divine Grace and Power over as a poor, struggling, single-mother and in the space of twenty years transformed it into a mega-church.

A consummate speaker who could no more walk past a microphone and not start speaking than she could walk on water, (special effects not-withstanding), she realized that King James was much too confining for what she had in mind.

Over the years, chapter-by-chapter she had released the Gracy Sherman (Dr. of Divinity) IMPROVED Bible. Notably, she did not retain Deut 12:32

“Whatever I command you, you shall be careful to do; you shall not add to nor take away from it.”

She kept the skeleton of the Bible as most knew it but she removed the parts that made her audience uncomfortable and added other bits. If pop-psychology, New Age/Scientology and the Critical Race Theory were the meat, potatoes and carrots of the stew she was serving; Marxism was the gravy that flavored every bite.

She was widely successful.

Her audience exploded. Fundraising matched. She opened the second largest church in the Lansing area out by the freeway. It had 52,000 square feet worship area.

Her crowning achievement was when she bought the downtown facility from a foundering a congregation of a legacy, main-line denomination. They were happy to sell it to another "church". Clearly, none of the Elders bothered to read the “Bibles” that were in every pew.

The addition of that facility vaulted Dr. Gracie Sherman ahead of her arch-rival on a square-footage basis. It was a stunning accomplishment for a girl who had dropped out of the Zanesville, Ohio high school and had never set foot in a college or university. The Dr (Divinity and Sacred Writings) was attributed to a now-defunct school in South Carolina where it was impossible to check her bona fides. Cunning, yes. Stupid, no.

Gracie was mid-way through her third line when her heart said “ENOUGH!” and went Tango Uniform. Too many years of untreated high blood pressure and Type II diabetes. Too much sugar and salt. No exercise. And now massive lines of exceptionally pure crank.

Nobody heard her body hit the floor. Her guests were rocking and the music was blasting.

*Please feel free to comment on what "bare bones" combat shotgunning should cover. I am NOT an expert. Dar is stressing "fighting retreats" because he doesn't see how "clearing" structures of aggressors fits with the mission of protecting his daughter.