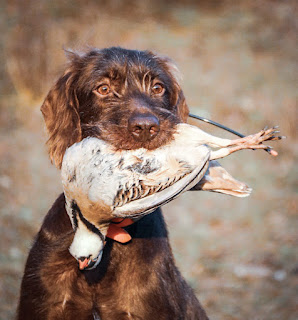 While Mrs ERJ and I were on one of our walks we ran across a Pudelpointer named C and his owner Tom.

What an awesome dog! Watching him run was to watch poetry in motion. He was five times more graceful than the finest figure skater in the world.

Tom was a life-long bird hunter and had many dogs since 1973 when he bought his first retriever. His current Pudelpointer left them all in the dust.

Perhaps it was the culmination of almost fifty years of working with and training hunting dogs, or maybe it was the dog, but Tom said "This dog is very 'soft'. He can almost read my mind. He hates it when he makes me unhappy. I can frown at him him and he will never make that mistake again."

Some crosses collect the worst attributes of each breed*. Others, magically, capture all of their finest traits. At least one dog owner believes the Pudelpointer is the second kind of cross.

The dog and owner we saw were both exceptionally fine. The exact chain of causality is open to debate.

From roughly 1850-to-1960 our thinking was dominated by breeds, cultivars, county fairs and field trials. Every year saw a new, miracle potato, apple, peach, strain of corn, breed of cattle or hog or chambering in a firearm.

Two decades later most of those miracles had evaporated. What happened?

Well, for one thing hype sells. How can anybody command premium prices if everybody understood that Red Pontiac potatoes, Liberty apples, Iochief sweetcorn, Angus cross cattle and Hampshire-Duroc hogs, while not exotic were perfectly capable of meeting the mortgage payments AND feeding your family.

A second factor is in-breeding depression. If I cross two very different breeding lines, say Australian Cattle dogs and Mountain Curs, I will get out-breeding vigor. The cross will appear to be "magic" but if I start in-breeding to stabilize the 'magic' then it will evaporate.

A third factor, at least for some kinds of plants, involves virus. Most seeds will not have the virus of their mother. So a new breed of potato will almost always have no virus loading. It will outproduce its virus-handicapped benchmarks by a wide margin. However, as it spreads (undoubtedly due to its eye-popping yield) it will become infected with virus spread by insects and nematodes. Over the course of a decade or two, it will have been infected by the same virus handicapping its competitors and it will not be any better than them.

A fourth factor involves enthusiasts versus consumers. Tom, the Pudelpointer's owner, was an enthusiast. With his experience and love of dog he could make an average dog into a GREAT dog. Others, seeing that dog would buy the breed and expect the magic to come with the pedigree and price tag. Likely, they would be disappointed.

Addendum Two (*): This is a delicate topic where anything I write is likely to offend half the people reading this.

One example of a sub-optimal pairing involves breeding dogs with a high need for "mouth gratification" with dogs with easily triggered "rage reactions".

I freely admit that the sub-optimal results might not hit every off-spring. I also submit that it is impossible to determine WHICH off-spring are sub-optimal a priori.

For example: Consider breeding a "retriever" with any dog breed selected to fight other dogs.

Retriever breeds are selected to have a high need to "mouth". Over the last forty years, trainers recognized that "ball drive" is a great training aid and lines of dogs of all breed have been selected with high "ball drive" because unlike food treats, ball drive does not diminish with multiple rewards.

Dog breed that were selected to fight other dogs (or bulls) in pits were selected for high rage reaction, often triggered when whatever is in their mouth tries to free itself.

Combining those two traits can result in a dog that is "mouthy" and can switch into "rage mode" when the arm or leg or face that is mouthed attempts to get away.

The bromide "It is all in how you raise them" is an untestable hypothesis until it isn't. And then it is too late.