One of the German Shepherds staged a jail-break

Hercules, the senior German Shepherd went walk-about this morning. It was an hour before he decided to amble on home.

He knew he was in the wrong. He slunk up the driveway like a hen-pecked husband sporting fresh lipstick on his collar and the odor of way too many gin-and-tonics. Belladonna gave him a very stern talking-to.

Examining the site of the jail-break revealed that sub-optimal door hanging caught up with us. 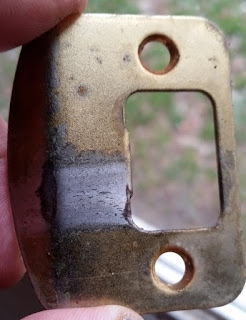 You can see from the drag marks on the strike plate that the bolt is hitting low and just barely hits the opening. The original installation was 2002. Tightening the screws on the door hinge raised the bolt every-so-slightly but not enough to address the issue.

It was clearly a poorly installed door from Day One.

Looking at two other doors from that vintage of installation also revealed issues that need to be dealt with.