Jim Cooper pulled the work tickets off the spindle with his truck’s number on it.

Looking through them he noticed an epidemic of sewage lift stations in-op.

Jim poked his head into the office and asked “Hey, Debbie, what is the deal with all the lift stations?”

Debbie shook her head and then tapped on her keyboard. The “cans” or lift stations communicated wirelessly to the dispatch system. “Both pumps are tripping out on thermal-overloads.”

Then, checking a few more “Same with the others.”

Jim grunted. There had been a spate of faults earlier when the voltage had drooped and the three-phase motors had been slow to spin up but he had only seen a few thermal-overloads in his career. For one thing, the pumps were submerged in waste-water (sewage to civilians) which kept them cool. For another, centrifugal pumps only had to overcome inertia when spinning up as they didn’t see much pumping load until the rpm were up.

Pretty much the only thing that would cause a thermal overload was a locked rotor and the pumps were designed to make that almost impossible.

The vanes on the impeller were beefy and had ample clearance to the inlets in the housing. The inlets faced downward so vandals could not drop rebar down the hole and potentially spear the impeller.

Furthermore, there were always two pumps and pump motors “in the hole”. They alternated pumping to even out the hours in the unit and they had a back-up emergency mode when one pump could not keep up. Losing two pumps in one can was unheard of. To have them failing across the service area, wholesale was unheard of.

Jim reflected on how his job had changed in the last twenty-eight years.

Jim didn’t even have a high school diploma. The City had taken him on as long as he got his GED in the first year.

“Cans” used to be a small part of what sewer workers had to deal with but that changed as the EPA regs put pressure on the smaller towns in the metro area. It was just easier and more economical to pipe it to the City waste-water treatment plant than to keep up-grading the host of small ones.

Runs of pipe that had been slightly more than a mile and had their vertical drop enhanced by the valley the City was nestled within now stretched twenty miles in every direction. There was not enough vertical drop to push the high-solids waste-water that far, and that is where the ‘cans’ or lift stations came in. It was far cheaper to add "cans" than to dig up now-undersized pipe and replace with larger.

As the number and complexity of the ‘cans’ increased, it made sense to have one person specialize in them, and that guy was Jim. 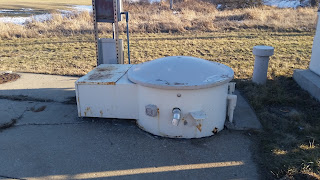 Pulling up the U-shaped drive of the first “can” on his list Jim immediately noticed that the cover of the “can” was askew. Jim parked fifty feet from the “can” even though he knew to within a couple of feet where the walls of the vault were. The last thing Jim wanted was to have the truck fall through the reinforced, concrete cap and tumble down, into the thirty-foot deep vault. Water under pressure does funny things and he had seen vaults where the fill around the walls had washed away.

Stepping around to the back of the truck he put on his vest, life-line and BA-Light. It takes a lot of lumens to punch down into the stygian depths of the vault and make out details when everything is covered with human feces.

Jim could smell the raw sewage from the truck. It was not a false alarm.

Shining his light through the gaping void where the bent-up cover didn’t meet the riser, Jim could see the waste-water within six feet of the ground. The City had been the recipient of Federal money to separate their storm and sanitary drains. Unfortunately, it was not possible to find every place where the two interconnected. Recent rains had increased the sanitary load immensely.

There was some unusual trash next to the side of the can. Jim might have had a shitty job but he was fussy about some things, trip hazards for one.

Jim picked up the trash and was carrying it toward his truck when he heard the sound of gunfire. That was unusual but not rare in this part of town. What was unusual is he could hear the impacts of the rounds on his truck and hear them “SPOINGING” off as they ricocheted.

“SON OF A BITCH!” Jim hollered.

He dived into the driver’s seat, fired up the rig and floored the gas pedal.

Calling in as he raced back to HQ, he informed Debbie about what had just happened.

Getting back to the office, his boss directed him to go back and start fixing “cans”.

“Mebbey if you give me a bunch of cops” Jim said.

“Then I just retired” Jim said as he threw the piece of trash he had picked up on top of the boss's desk.

“What is that?” the boss asked looking at the oak 2”-by-3”s that had been lashed together with wire to make a 12” long 4”-by-3”. By the look of the boards they had once been the bottom skids of an industrial pallet.

“That is what done it” Jim said. “Probably enough wire wrapped on that to make it sink slow to the bottom. The pump sucks it in on start-up and it jams the impeller to the housing.”

Jim turned and walked away. He could have retired after 25 years but was hanging on for another five to pay off the single-wide down in Kentucky where he and Suzy were gonna move.